Scientists have been looking for ways of modifying the Earth's environment to control global warming - it's known as geo-engineering.

One way to do this is simply to reflect more of the sun's light, changing the Earth's reflectivity, or albedo.
This could be attempted using vast, flexible space reflectors (1) placed in orbit around the Earth. Alternatively, various types of "stratospheric aerosols" could be released in the upper atmosphere (2) to scatter some light back out into space. Earth-bound reflectors (3) could do the same.

Another approach is to directly reduce the atmospheric carbon that, among other things, leads to temperature rises.
This could be done by "fertilising" the ocean , stimulating the uptake of carbon by surface algae that would eventually sink to the ocean floor. Exposing the surfaces of carbonate and silicate rocks in "enhanced weathering" could provide a place for carbon to be absorbed.
Another frequently mentioned proposal is the capture of carbon dioxide from the air using "artificial trees", followed by liquefaction and storage, probably in underground reservoirs.

There is no single geo-engineering "silver bullet" that should be pursued as an all-encompassing solution to climate change, says the UK's Royal Society in its analysis of the cost of a range of proposals compared with their efficacy.
Stratospheric aerosols seem to offer the most effect for the least investment, and could be deployed soon, but present an unknown risk to the environment.

Changes to desert surface albedo are projected to be more effective than ocean fertilisation, but both could change delicate ecosystems in unexpected ways.

Let’s take a look at the contents of chemtrail sprays. Then we will know what we are up against, and how to proceed further with strengthening the body’s defenses (which is absolutely never a guarantee that no health injury can occur, especially where chemtrail exposure is concerned. Only a precautionary measure).

Literature available about chemtrails may be controversial and conflicting, but that of course may be reason in itself to raise some querying eyebrows.

According to Aajonus Vonderplanitz, Ph.D. www.mayanmajix.com/art2152.html :

“Laboratory examination of those chemicals found that they were manufacturing wastes from military industry and biowarfare substances. In several laboratory analyses, the composition of chemtrails was revealed:

After chemtrails lingered, spread, covered entire skies and fell, reports of illnesses increased substantially, such as persistent hacking coughs, upper respiratory and intestinal distress, pneumonia, fatigue, lethargy, dizziness, disorientation, headaches, aching joints and muscles, nosebleeds, diarrhea, bloody stools, depression, anxiety, loss of bladder control, and nervous tics. Much of it is reported as flu and everyone but a few know that much of it is poisons dropped over our heads, inhaled, absorbed through our skins, and consumed in our food.” 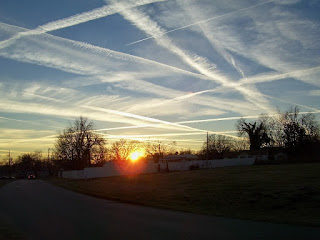