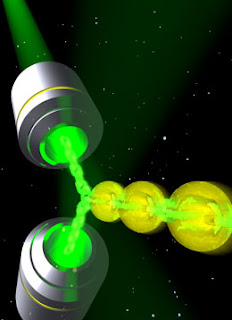 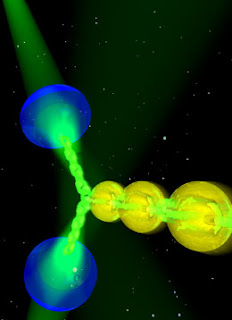 A team of scientists from Scotland and the Czech Republic has created a real-life         “tractor” beam, as featured in the Star Trek movies, which for the first time allows a beam of light to attract objects.

Within the experimental system, light beam is converted into a pulling device, that gathers micro-objects just like when using a chain.

Although light manipulation techniques have existed since the 1970s, this is the first time a light beam has been used to draw objects towards the light source, albeit at a microscopic level.

Researchers from the University of St Andrews and the Institute of Scientific Instruments (ISI) in the Czech Republic have found a way to generate a special optical field that efficiently reverses radiation pressure of light.

The new technique could lead to more efficient medical testing, such as in the examination of blood samples.

In the US science fiction show, a tractor beam was a method of using a beam of light which could pull space-ships and other large objects towards the source of the light.

The team, led by Dr Tomas Cizmar, Research Fellow in the School of Medicine at the University of St Andrews, with Dr Oto Brzobohaty and Professor Pavel Zemanek, both of ISI, discovered a technique which will allow them to provide 'negative' force acting upon minuscule particles.

Normally when matter and light interact the solid object is pushed by the light and carried away in the stream of photons.

Such radiation force was first identified by Johanes Kepler when observing that tails of comets point away from the sun.

Over recent years researchers have realised that while this is the case for most of the optical fields, there is a space of parameters when this force reverses.

The scientists at St Andrews and ISI have now demonstrated the first experimental realisation of this concept together with a number of exciting applications for bio-medical photonics and other disciplines.

The exciting aspect is that the occurrence of negative force is very specific to the properties of the object, such as size and composition.

This in turn allows optical sorting of micro-objects in a simple and inexpensive device. Over the last decade optical fractionation has been identified as one of the most promising bio-medical applications of optical manipulation allowing, for example, sorting of macromolecules, organelles or cells.

Interestingly, the scientists identified certain conditions, in which objects held by the “tractor” beam force-field, re-arranged themselves to form a structure which made the beam even stronger.

Dr Cizmar said: “Because of the similarities between optical and acoustic particle manipulation we anticipate that this concept will provide inspiration for exciting future studies in areas outside the field of photonics.”

Dr Brzobohaty said: “These methods are opening new opportunities for fundamental phonics as well as applications for life-sciences.”

Professor Zemanek said: “The whole team have spent a number of years investigating various configurations of particles delivery by light. I am proud our results were recognised in this very competitive environment and I am looking forward to new experiments and applications. It is a very exciting time.”