Chemicals banned in Europe still make their way into US foods 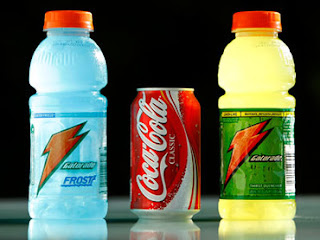 Have you ever tasted a soft drink so good you thought it should be illegal? In some parts of the world, ingredients used in beverages available across the United States are outlawed — but not because they’re dangerously delicious.

Drinks including Mountain Dew, Gatorade, Powerade and Squirt are all commonly available at restaurants and convenience stores across the US. If you’re overseas and thirsty for one of many products made by PepsiCo, Cocoa-Cola or the Dr. Pepper Snapple Group, you might get something entirely different. Brominated vegetable oil, an ingredient used by those manufacturers in an array of beverages, is banned in locales like Europe and Japan.
The New York Times reports that around 10 percent of drinks sold in the US contain brominated vegetable oil, or BVO, but elsewhere things are a bit different. Beverages overseas are stripped of the chemical, used usually to help distribute flavor, with foreign health officials citing some serious medical concerns as the reason for the ban.

Sarah Kavanagh, a teenager from Hattiesburg, Mississippi, only became aware of BVOs recently while examining a bottle of Gatorade. A quick Web search had her rethinking what she drinks, though.
“I knew it probably wasn’t from an animal because it had vegetable in the name, but I still wanted to know what it was, so I Googled it,” she tells the Times. “A page popped up with a long list of possible side effects, including neurological disorders and altered thyroid hormones. I didn’t expect that.”

Most Americans are in the same boat, but the substance is still completely legal in the US.
“BVO is banned other places in the world, so these companies already have a replacement for it,” Kavanagh tells the Times. “I don’t see why they don’t just make the switch.” According to the paper, companies say the switch would simply cost all too much.
After becoming aware of the compound, she started a campaign to help raise awareness of BVO. Since that petition was launched in November, she has collected over 205,000 signatures from others urging a federal ban on BVO's.

"I was shocked that they'd put their consumers at risk like that and that the FDA would allow something like that to be put in products," she tells the Chicago Tribune.
The US Food and Drug Administration maintains that all foods sold legally in the US are safe for human consumption. In a statement to the Tribune, in fact, the FDA says the US food supply is “the safest in the world” and that the agency’s foremost promise is to “protect public health by ensuring that foods are safe and properly labeled.” Even if American labels advertise the use of BVOs, though, that doesn’t do much to dismiss the concerns that have caused bans of the chemical internationally.

Brominated vegetable oil isn’t addictive and it hasn’t been proven to be fatal just yet. According to some studies, rodents subjected to the substance developed reproductive and behavioral problems.
"The FDA has been extremely lenient in evaluating food additives and it's almost impossible to get the FDA to ban an additive once they have approved it," Michael Jacobson of the Center for Science in the Public Interest adds to the Tribune. "It's just not as public health oriented as it should be."
“I just don't think they're doing enough to protect the public's health with regard to food additives,” he says.

That one additive, BVO, certainly doesn’t seem safe to Kavanagh. On her Change.org petition, she notes that one of the elements of BVO, bromine, is used most often to make products flame retardant. It’s also been included in gasoline additives and pesticides, and was originally used as a general sedative until only a few decades ago. Scientific Americans says BVO “links to impaired neurological development, reduced fertility, early onset of puberty and altered thyroid hormones.”
“I’m not a scientist, but if there are lots of suspicious things about putting a flame retardant chemical in Gatorade (most flavors don’t even use it!) then why would Gatorade want to put it in a product designed for people like me who are into sports and health?” Kavanagh asks on Change.org.

The petition, which needs fewer than 95,000 more signatures before it is complete, will be sent to Gatorade, PepsiCo and other American beverage companies. “Please stop deceiving consumers and remove this chemical from your products,” the petition insists.