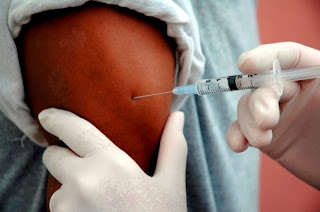 Researchers are continuing to search for a HIV/AIDS vaccine that could potentially solve the AIDS epidemic.

Now, they may be one step closer, Scientists have announced that they've developed a HIV/AIDS vaccine candidate that appears to have the ability to completely clear an AIDS-causing virus from the body.

"To date, HIV infection has only been cured in a very small number of highly-publicized but unusual clinical cases in which HIV-infected individuals were treated with anti-viral medicines very early after the onset of infection or received a stem cell transplant to combat cancer," said Louis Picker, one of the researchers, in a news release. "This latest research suggests that certain immune responses elicited by a new vaccine may also have the ability to completely remove HIV from the body."


In order to develop this vaccine, the researchers used cytomegalovirus, or CMV. This common virus is already carried by a large percentage of the population. Yet when CMV is paired with SIV, it has a unique effect. The modified version of CMV engineered to express SIV proteins generates and indefinitely maintains so-called "effector memory" T-cells that can seek out and destroy SIV-infected cells.

While T-cells are a key component of the body's immune system, they can't eliminate the virus. Yet the SIV-specific T-cells managed to accomplish this feat. The researchers gave the vaccine to monkeys to see how they reacted. It turned out that 50 percent of the monkeys given the highly pathogenic SIV after being vaccinated became infected with SIV. Over time, though, they eliminated all trace of SIV from the body. In other words, the hunters of the body were provided with a much better targeting system and weapons to destroy the virus.

"Our vaccine mobilized a T-cell response that was able to overtake the SIV invaders in 50 percent of the cases treated," said Picker in a news release. "Moreover, in those cases with a positive response, our testing suggests SIV was banished from the host. We are hopeful that pairing our modified CMV vector with HIV will lead to a similar result in humans."

The findings are crucial for the ongoing HIV/AIDS research. Currently, the scientists are examining why only a subset of the animals treated had a positive response. They hope to eventually boost the effectiveness of the vaccine.

The findings are published in the journal Nature