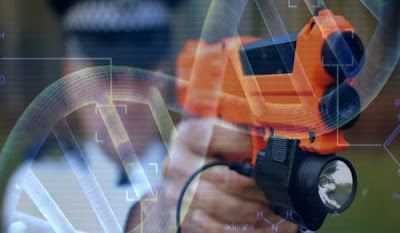 A frightening new weapons technology will let police and others tag people and identify them through DNA.


The High Velocity DNA Tagging System consists of special guns that will allow police to tag and trace others.

The system works like this: A shooter fires a pellet into a person; the pellet contains a special synthetic DNA that enters the blood stream; police or anybody else can later test the person to see if it is the correct individual.


The system is made by a British company called Selectamark. The firm’s Managing Director (the British Equivalent of a CEO) Andrew Knights told reporters that it was designed for riot control work. Knights also stated that there will be pistol and rifle variations of the weapon available at some point in the future. The gun is similar in many ways to RFID smart guns, which Anthony Gucciardi has been sounding the alarm over for quite some time.


Injected with Synthetic DNA against Your Will

It’s pretty easy to see how this technology could be abused. Authorities could use it to tag protesters then target them for retaliation, such as arrest or job loss.

There are also the potential health risks; we don’t know what effect the synthetic DNA might have on the human body. Damage to DNA, the building blocks of life, can lead to many ailments, including cancer. Remember Agent Orange was supposed to be safe, but it wasn’t.

A final danger from this technology is that it could be used to inject other chemicals or synthetic DNA into the human body. I could imagine such pellets being used to deliver tranquilizer or mood altering drugs. Those drugs could be used to knock protestors out or simply make them more passive and easier to control.

Obviously, injecting people with mood altering drugs against their will would be a human rights violation. It is easy to imagine those who sign off on such travesties as drone attacks resorting to such methods.

The company behind this technology, Selectamark, is pretty frightening too. It manufactures “asset and property labeling systems,” such as those we see on vehicles.

One has to wonder if Selectamark is trying to create a human labeling system next. Such a system could be used to keep track of prisoners or even citizens in a city. The NSA geniuses that love to monitor all of our communications would undoubtedly welcome such technology. Once again, more technology is being abused to create new and better means of limiting our freedoms.