Message from Putin to America. 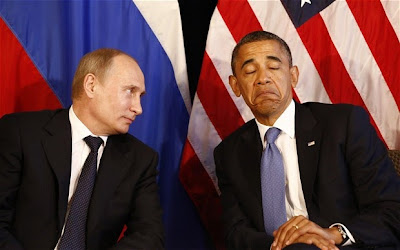 Russian President Vladimir Putin has sent an open letter to Americans and what it says might make you look at him in an entirely different light.


In fact, in reading his letter, I can only wish that Barack Obama thought much the same way as him on the most pertinent issues. Why is it that Barack Obama is supporting these same Unholy, Unruly, Jihadi Muslims that Vladimir Putin is hoping to crush? In fact, Putin’s interview below is quite thought provoking, especially when he admits that his good friend and ally Bashar Al-Assad IS capable of possible launching such an attack upon his own people.

Putin also has called the US government ‘outlaws’ if they strike out at Syria as shared in the video at the bottom of the story. The first two sentences of Putin’s letter makes it plainly clear Putin is aiming much of his talk to the ‘sheeple’.

"How do I put this politely? You Americans are dumb. Today, Russia and America are fighting each other over fighting the Muslim radicals. Instead, we should be uniting to crush these violent Islamists, once and for all.

You Americans want to remove my ally, the Syrian leader Bashar Al-Assad. To borrow a phrase from your John F. Kennedy, Assad may be a son-of-a-bitch, but he’s my son-of-a-bitch.

So if you want to destroy him, what are you going to give me in return? If your answer is, “We will give you nothing,” well, why would I ever agree to that? That’s not negotiation, that’s dictation; it’s a return to the bad Yeltsin days, when Holy Mother Russia was pushed into the mud like a used whore.

Look, I’ll be the first to say that Obama’s “red line” comment was dumb. It’s obvious he hadn’t thought it through; one can see it in the words he used to express his policy. He said that the “red line” would be crossed if “a whole bunch” of chemical weapons were used. What kind of language is that? How does one quantify a “whole bunch”? This is the President of the High-and-Mighty United States, and he’s talking like a schoolboy? All for this silliness over sarin in Syria?

Do I think that Assad did it? Gassed those people? I don’t know; I’ve never asked him. He’s certainly capable of it, and yet only the Americans think that the case against Assad is a “slam dunk.” Everyone else agrees that the case is murky. Everyone else follows the first rule of intelligence-gathering: Consider the source–namely, the pro-rebel media. In this instance, the rebels were losing, and then they got “gassed”–and now Uncle Sam is rushing to their side. How convenient."

So, even Putin thinks that Assad is capable of launching chemical weapons attacks against his own people; however, at least he would prefer to wait until the United Nations report is released before launching attacks against him. So, does Putin even have a solution or is he all just talk, talk, talk? He ends his letter to the American people with a few suggestions.:

"So those are the real evil empires: Iran and Pakistan. Bringing them to heel won’t be easy, of course, but we Russians have never shied away from strong measures. The Americans could learn a lot from us.

So that’s my vision. Let’s stop worrying about silly little niceties about the right and the wrong way to fight a war. Let’s stop trying to bring democracy to barbarians. Instead, let’s bring them the only thing they understand–force.

Let’s all of us–Moscow, Washington, London, Paris, Brussels, Jerusalem, Lagos, Addis Ababa, Beijing, New Delhi–come together in a new Holy Alliance, similar to that which kept Europe safe from radicalism in the early 19th century. Let’s join one another to crush the unholy, unruly, jihadi Muslims. The good Muslims will thank us for it. And if they don’t–too bad.