Syria and the FALSE FLAG attack of the US Government


In light of recent investigations of chemical weapons attacks in Syria, it appears that the United States Government is involved in an Imperialistic pursuit of the resources of Iran.

Iran has an arms treaty with Syria, in which Iran has a commitment to defend Syria and vice versa in times of War.

The lack of a Central Bank in the country of Iran and the refusal of the Iranian government to become dependent on the Western World has kept the United States Government on a Mission to engage in War with Iran to topple the current Government.


We have seen the same tactics used in Iraq and Libya to topple regimes that don't fit the United States Imperialistic Ambitions. Militaristically Engineered False Flag Attacks are the method the United States Government Uses to convince a portion of the world that intervention is necessary.

Chemical Weapons were used to Murder hundreds of Syrian People in a suburb of the Syrian City of Damascus. Although the initial reports claimed that the Assad led Government of Syria was responsible for the attacks, it is now believed by both investigators and other world leaders that the United States backed Syrian National Coalition is responsible for the attacks. It's also believed they are using these war crimes to give an excuse for the United States Government to intervene in the region.

The Chemical Weapons used against the Syrian People are now shown to be the work of the United States Government by way of the U.S. backed Syrian rebels known as the Syrian National Coalition. This is a blatant False Flag attack and should not be endorsed by the citizens of the United States. There is absolutely no benefit for the American People or the world in general as a result of a war with Syria or Iran.

As citizens of the world the majority of us are completely opposed to large scale warfare and the impending war with Syria and Iran must be opposed in every nonviolent way at our disposal. The Liberation of the Syrian People should not be decided by the interests of other nations or even a council of other nations. Both Syria and Iran are independent nations and should remain independent nations.

We have seen the reign of Tyranny in this world too many times before and the collective voice of the people are opposed as we always will be. Please take the time to educate yourselves as non-biased as possible and spread this information to anyone and everyone you can. Our collective voice is and will always be our only hope to liberate this world from the hands of Tyranny.

We are Anonymous,
We are Legion,
We do not Forgive forcing the world into a war based on lies.
We do not Forget the war crimes that have been committed.
Proprietors of False Flag Operations,
Expect Us!


Damascus welcomes Russia’s call to hand control over its chemical weapons to the international community, the Syrian foreign minister said responding to Sergey Lavrov's statement after the two met in Moscow.

“The Syrian Arab Republic welcomes Russia’s initiative, based on the Syrian’s government care about the lives of our people and security of our country,” Syrian Foreign Minister Walid al-Muallem said in response to the statement by his Russian counterpart.

“We are calling on the Syrian authorities not only agree on putting chemical weapons storage facilities under international control, but also for its further destruction and then joining the Organization for the Prohibition of Chemical Weapons,” Russia's Foreign Minister Sergey Lavrov said earlier.

The UN chief has called for measures to provide for the safe storage and destruction of the Syrian chemical weapons arsenal.

“I am sure that the international community will take quick measures to make sure that these chemical weapons reserves are stored in a safe place and are to be destroyed,” Ban Ki-moon said.

Britain has responded to the Russia-Syria dialogue, saying that the chemical weapons handover idea for Syria must not be used as a “distraction tactic”.
-read more-


Members of a UN human rights conference in Geneva were presented accounts of international experts, the Russian Foreign Ministry reports.

The speakers argued that the suspected sarin gas attack near Damascus on August 21 was likely a provocation of the rebel forces and that a military action against the President Bashar Assad government will likely result in civilian casualties and a humanitarian catastrophe affecting the entire region.

Evidence for the Russian case, including numerous eyewitness reports and results of investigations of the chemical weapon incident by activists, were handed over to a UN commission of experts probing the Syrian crisis, the ministry said.
-read more-

He argued that according to the Nuremberg principles, which set the guideline for the definition of war crimes, the US "is starting an aggressive war against another nation."

Webre described US President Barack Obama's decision to seek a congressional authorization for an attack against Syria as an attempt to "get some political cover and some legal cover behind him."

"Under international law, the US Congress cannot sanction or provide legal cover to any attack by the US," the legal expert noted. The call for military action against Syria intensified after foreign-backed opposition forces accused the government of President Bashar al-Assad of launching a chemical attack on militant strongholds in the suburbs of Damascus on August 21.

On Saturday, Obama said he would seek a congressional authorization for an attack against Syria as Washington "cannot and will not turn a blind eye" to an alleged chemical attack in the Arab state. The Obama administration has, however, said it "has the right" to attack Syria even if the Congress does not approve the measure.

Syria has been gripped by deadly unrest since 2011. According to reports, the Western powers and their regional allies -- especially Qatar, Saudi Arabia, and Turkey -- are supporting the militants operating inside Syria.


Did you know that the United Nations has had evidence that the Syrian rebels have been using sarin gas against Syrian government forces since May?  This was reported by Reuters and other major news organizations around the world, but there has been an almost total blackout of this information by the big corporate news outlets in the United States.  So why are they keeping the truth from us?  What you are about to read might really surprise you.  The Syrian rebels have been caught red-handed with sarin gas in their possession, the UN has had evidence that the rebels have been using sarin gas for several months, and the Syrian rebels have even admitted that they were the ones that caused the deadly gas attack that the U.S. government is using as justification to attack Syria.  Please share this article with as many people as you can, because it is absolutely imperative that we get the truth in front of the American people.

All the way back before the beginning of the summer, the UN has known that the rebels have been using sarin gas against forces loyal to Assad.  The following is from a Reuters report that was published back in May…

U.N. human rights investigators have gathered testimony from casualties of Syria’s civil war and medical staff indicating that rebel forces have used the nerve agent sarin, one of the lead investigators said on Sunday.

The United Nations independent commission of inquiry on Syria has not yet seen evidence of government forces having used chemical weapons, which are banned under international law, said commission member Carla Del Ponte.

“Our investigators have been in neighboring countries interviewing victims, doctors and field hospitals and, according to their report of last week which I have seen, there are strong, concrete suspicions but not yet incontrovertible proof of the use of sarin gas, from the way the victims were treated,” Del Ponte said in an interview with Swiss-Italian television.

“This was use on the part of the opposition, the rebels, not by the government authorities,” she added, speaking in Italian.
-read more-

Putin: Syria chem arms handover will work only if US calls off strike 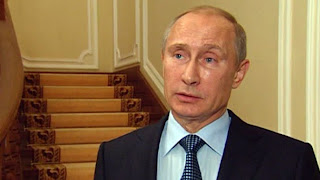 Russian President Vladimir Putin said that Syria’s chemical arms handover will only work if the US and its allies renounce the use of force against Damascus.

"Certainly, this is all reasonable, it will function and will work out, only if the US and those who support it on this issue pledge to renounce the use of force, because it is difficult to make any country – Syria or any other country in the world – to unilaterally disarm if there is military action against it under consideration," President Putin said on Tuesday.

Putin said the disarmament of Syria’s chemical weapons had been extensively discussed by experts and politicians.
-read more-

Related:
Message from Putin to America
USA revealed as enemy of world
Obama should be stripped of his Nobel Peace prize if he starts Syria war
Syria: Another Western War Crime In The Making
Dear World, Americans Don't Want War With Syria