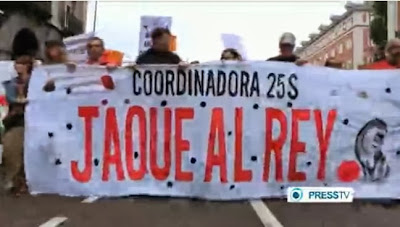 Thousands of Spaniards have taken to the streets of the capital to protest against the country’s monarchy.


The march was held on Saturday in Madrid, where people called for the abdication of King Juan Carlos, an end to the monarchy and an establishment of a republic.

Protesters walked with banners reading, “Checkmate to the King,” and chanted, “Tomorrow, Spain will be a Republic.”

Critics consider the monarchy to be illegal since it was appointed by General Francisco Franco.
Meanwhile, King Juan Carlos denied on September 20 rumors that he was planning to abdicate after announcing that he was to have his eighth operation in just over three years.

The royal family has also been hit with a number of scandals, leading to a noticeable drop in public confidence in the monarchy.

Outrage about the monarch’s lifestyle was triggered last year after King Juan broke his leg during an expensive elephant-hunting trip in Botswana while the recession-hit country was grappling with an unemployment rate of 26 percent.

The royal family drew further criticism when the king’s son-in-law Inaki Urdangarin appeared in court in February and was accused of embezzling millions of euros of public funds paid in contracts to a company he managed several years ago. His wife, Princess Cristina, was summoned to testify in a hearing over the corruption case.

Princess Cristina and her children moved to Switzerland in August following the corruption scandal in a bid to draw away attention from the royal family. However, it backfired after reports revealed the high cost of her living there.

The latest official census published by Spain’s Center for Sociological Research in May showed that the monarchy’s popularity had hit an unprecedented low level of 36.8 percent.