USA revealed as enemy of world 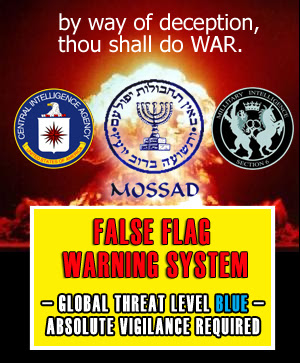 The United States of America stands exposed in the eyes of the entire world as the number-one terrorist threat to the future of humanity. Many have known this fact already, but now it is universally clear.


As the US prepares to launch an overt war on Syria (the covert war has been raging for 30 months), the vast majority of humanity can finally see through all its decades of pretense and conceit as the world’s model of democracy and international law. And what they see is the ugly opposite. The US is a terrorist state that holds international law, democracy and human rights in utter contempt. It is ready, as it always has been, to kill countless civilians for its selfish political ambitions. That is the conventional definition of “terrorism”.

Syria’s President Bashar al-Assad made a profound point recently when he said that his country has faced aggression for more than two years, but only now is the real enemy revealing itself – the US and its minions. But the US terrorist state is not just being called out over Syria. It is being revealed as the enemy to the entire world.


From past wars in the Caribbean, Central America, Philippines, Vietnam and Indochina, through coups and covert ops in Iran, Iraq, Africa, to recent killing fields in Afghanistan, Yemen, Pakistan and Somalia, the historical picture is now complete. All these conflicts and many more – too many to mention here – integrate into one indisputable truth. The US is the world’s biggest terror state. If it is not dealt with definitely, then the future of the world is in peril more than ever.

In previous crimes of aggression, the US ruling elite could invoke the spurious cover of “a coalition of the willing”, or the abused authority of the United Nations or NATO. It was able to do that through deployment of lies, fabrications and a supine mass media that would lend credibility to the mendacity. Now, thanks to alternative, critical media and instant global communications, the American lies don’t work any longer. In an instant, they are exposed; just like the attempt in the last few hours of US Secretary of State John to frame up Syria over alleged chemical weapons use.

The New York Times, BBC and the usual Western media mouthpieces for imperialist propaganda dutifully facilitated Kerry and his US state terrorism with bombastic, important-sounding headlines: “Kerry lays out evidence against Syria”. There was hardly a critical question raised, even though there are grounds for dozens such questions. Years ago, that kind of herd-think might have been enough to buy the US warmongers enough time to launch a war – but not any more. Within minutes of Kerry’s supposedly definitive condemnation, statements, articles, tweets and blogs were pulling the charade asunder, showing that apart from Western-media-amplified bombast, Kerry was not saying anything of value. It was just another risible repetition of earlier hyperbole and empty rhetoric. Or in short, lies.

The people of the world have reached a critical mass of intolerance towards the rogue terror states of the US, Britain, France, Israel and a few other accomplices. We have watched their relentless mass murder and exploitation of fellow humans in Asia, Africa, and the Americas. We have witnessed how this tiny group of state terrorists imposes on the vast majority of humanity their vile criminality and in the process then insult us with grotesque lies and justifications. We have seen how these rogue states have stolen land, poisoned people’s water, burnt their crops, dispossessed their homes, assassinated families with aerial drones and ground drones in the form of death squads. They have committed all these shocking crimes with lies and impunity to the point where now these state terrorists are operating in more than one country simultaneously in a permanent state of relentless war, pushing the very future of humanity to the brink.

However, despite this lawlessness and gangsterism, the people of the world are fighting back.

This week the British parliament voted against the London government’s arrogance to provide its usual criminal special relationship to the Americans. In the execution of past war crimes in Afghanistan, Iraq and Libya – to mention a few – Washington could rely on the trusty British imperialists to give a veneer of “coalition of the willing”. British premier David Cameron’s plans to repeat the criminality by backing Washington’s plans to bomb Syria were dealt a crushing blow by the British parliament voting against any such military action. Cameron was forced to withdraw. The vote in the British parliament is not so much a sign of ethics among Britain’s political class. It is
more a reflection of the global awakening among ordinary citizens that this insane state terrorism must stop.

The French government has also backed off earlier bellicose bravado, with French President Francois Hollande belatedly calling for a “peaceful, political solution” over the Syrian crisis. Even Washington’s reliable Canadian puppet Prime Minister Stephen Harper has said that his country will not be getting involved military in Syria. It is also reported that 10 members of the NATO alliance – one-third of the total – are not willing to support American strikes. This latter grouping comprises the usual minions of the US. And we haven’t even yet acknowledged the more strident opponents, such as Russia, China, Iran and the majority of nations elsewhere in Asia, Africa and the Americas.

The people of the world have had it with elite Western rulers acting as terrorists who are holding humanity to ransom. The rulers are presiding not only over military terrorism. They are inflicting economic, social and ecological terrorism with their bankrupt capitalist smash-and-grab system. That system has reached the point of meltdown and that is why we are being pushed into relentless wars – in order for the rulers and their politician puppets to corner the remaining resources. The ultimate solution to end the wars is for the people to overthrow the economic system that US and Western elite rulers preside over. The insane criminality of the US rulers over Syria is exposing this historic challenge facing humanity.

After the British parliamentary setback the US Secretary of Defense Chuck Hagel said: “Our approach is to continue to find an international coalition that will act together. It is the goal of President Obama and our government… whatever decision is taken, that it be an international collaboration and effort.”

Can you believe how ridiculous these American puppets sound? What the deluded Americans do not seem to realize is that they are on their own. The only entities willing to support their aggression on Syria is Saudi Arabia and Israel. So, how’s that for credibility? The only support Washington can muster is from a feudal, sword-wielding, head-chopping regime and a criminal pariah genocidal state. Coalition of the Willing? More like Coalition of the Killing.


Buying a ticket to the war: no moron left behind


You’re just a click away on your remote. Get the popcorn. It’s a blast. This one has moral stature. They used chemical weapons, so they will pay.

Don’t miss Chris Matthews. He’s tingling all over. “The president did the right thing and he upheld the Constitution. Only a living god could figure out how to pull that off.”

Welcome to the Syrian theater. All the players are assembled. Which one will intervene and turn a two-day blitz into a global conflagration?

We realize you don’t have whatever it takes to actually enlist in the Armed Forces and do six insane tours in Afghanistan building A-frames and wondering when one of those villagers will shoot you in the head. No problem. You can experience a very good simulacrum in your own mind. The anticipation. The adrenaline flow. The sweaty palms. Then the limbic thrust of revenge.

And as a bonus? No court martial when it turns out you killed an Afghan who was just reaching in his coat pocket for a screwdriver to attach his new front door!

The Syrian run-up is almost as good as the first missile launch. Click to Wolf Blitzer as he recalls his coverage of Gulf War One, when he made his bones purely on the basis of his name.

Catch the living cadaver, Scott Pelley, as he flashes back on his work at the Davidian siege at Waco.

Count down to the first explosion with the eternal newsboy riding his bike and flipping papers on front porches, Brian Williams.

Feel the undertone of sodden grief with Dianne Sawyer (weeps for everybody/all the time) as she does war as only a former America’s Junior Miss can.

And then, boom! You’re there. The attack is on! The sky over Damascus lights up! What unknown newsman, standing on a rooftop, narrating the unfolding scene, will emerge from the carnage with name recognition and a sudden career bump that makes his colleagues want to murder him in his sleep.

America is united again. Feel it. What took us so long to find each other once more? Post your experience on Facebook. Share your ecstasy with faux friends. Recite the Pledge of Allegiance against a hip-hop track and hope it goes viral.

Finally, all the goody-two-shoes questions about who used chemical weapons and which side we’re backing in Syria and who is al Qaeda and the CIA sending weapons and killers from Libya to Syria are gone. Erased. This is the show! This is what counts! Pretext? Invented provocation? False flag? Don’t bother me, I’m eating war!

If only we still had the Rat Pack around. Frank, Dean, Sammy, Lawford, and Joey Bishop. They could do a Sarin Night at the Desert Inn and wow the crowd with their support for the guys who launch the Tomahawks.

If your brother-in-law is over at the house as you watch the missile strike and he says, “You know, there’s no good proof Assad used poison gas,” poke him in the eye with a sizzling hot dog on a stick and yell, “USA! USA! USA!”

Suddenly, they’re in. They were out, but now the Commander-in-Chief has his hand on the pulse of the nation. We’re off life support. Who cares about Fast&Furious, the IRS non-profit division, Benghazi? They’re in the rearview mirror and we’re accelerating down the superhighway to fame and fortune. Jobs? We can live off our own fumes!

Mind-controlled androids? This is who we are! Love it, live it, watch it, soak it in!

God bless Congress for giving Obama back Constitutional authority to kill the enemy of the terrorists we’re backing.

Related:
Obama should be stripped of his Nobel Peace prize if he starts Syria war
Syria: Another Western War Crime In The Making
Dear World, Americans Don't Want War With Syria 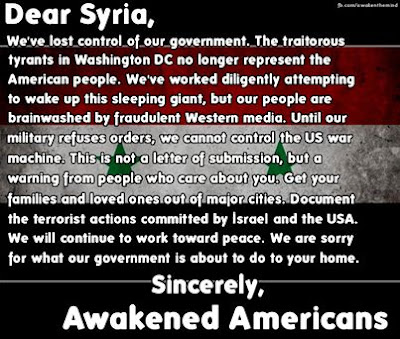