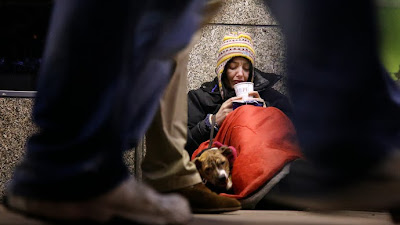 As EU countries battle the financial crisis with austerity, average citizens get hurt while unemployment rises and social programs disappear.


Up to 146 million Europeans are at risk of falling into poverty by 2025, the head of Oxfam’s EU office told RT.

If the damage being inflicted by the European Union’s austerity measures is not reversed, the number of people trapped in poverty will increase by up to 25 million people. If that is the case, Europe will be facing a “lost decade,” leading philanthropy organization Oxfam revealed in its new report.


“It’s really what’s at stake if austerity measures drag on as they are now. This is the projection, which we found out in this report about the true costs of austerity and inequality in Europe and definitely it’s a massive amount of people falling into poverty, but at the same time people like to highlight that some very few people, the 10 percent richest, will be getting richer. So it’s basically inequality - which is going to be increasing - and the level of poverty, which is also going to be increasing,” Natalia Alonso told RT.

The 29-page report, titled ‘A Cautionary Tale: The true cost of austerity and inequality in Europe,’ argues that the European model is under attack from ill-conceived austerity measures.

“Left unchecked, these measures will undermine Europe's social gains, creating divided countries and a divided continent, and entrenching poverty for a generation," states the report.

The report argues that the austerity measures being implemented in the EU are similar to the devastating ones used by the International Monetary Fund (IMF) over the past 25 years on poor countries – a scheme known as “structural adjustment” programs.

“These policies were a failure: a medicine that sought to cure the disease by killing the patient. They cannot be allowed to happen again…Some countries in these regions took two decades to claw their way back to square one,” the report states.
>read more>>