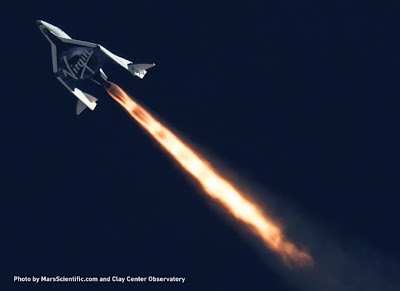 Virgin Galactic has made another leap forward when it comes to perfecting its fleet of spacecraft.


The company's SpaceShipTwo (SS2) has successfully completed its second rocket-powered, supersonic flight. That's not all, though; the company has also released some spectacular footage of this amazing flight.

SS2 is actually designed to ferry passengers into space. This latest flight, which occurred on September 5, demonstrated the vehicle's full technical mission profile in a single flight for the first time. This included a high altitude deployment of the unique wing "feathering" re-entry mechanism.


The spacecraft itself launched from the Mojave Air and Space Port, carried by the company's WhiteKnightTwo (WK2) aircraft carrier. It brought the SS2 to an altitude of 46,000 feet. Then, SS2 pilots ignited the rocket motor for a planned 20-second burn, which propelled the spaceship to 69,000 feet. During this time, the SS2 achieved a maximum speed of Mach 1.43. It then landed in Mojave after completing the test flight.

"This flight milestone represents a key step forward for the Virgin Galactic team," said Chairman of aabar Investments PJS, Kadem Al Qubaisi, in a news release. "The successful completion of all major aspects of the flight mission demonstrates that we are very close to achieving one of Galactic's key goals: commercializing access to space for the broader public."

The space race is moving to the private sector, and Virgin Galactic is just one of the companies getting in on the action. Currently, NASA is encouraging the private sector to develop these spacecraft in the hopes of using them to help ferry astronauts to the International Space Station. Currently, the space agency has to rely on a contract with Russia to send astronauts into space. This latest test flight, though, spells hope for the future of private spacecraft.

Want to see the SS2 for yourself? Check out the video below, courtesy of Virgin Galactic and YouTube.