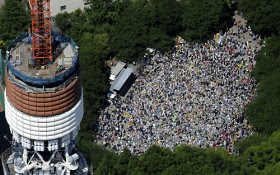 
People gathered in Shiba Park and later marched towards the parliament building. Among the organizers was Kenzaburo Oe, a Nobel literature laureate, who called on the Japanese government to leave the nuclear power plants in suspension out of fears for safety.

The Japanese government has previously stated that it will most likely allow those reactors to return to power which have been approved by the Nuclear Regulation Authority (NRA), whose new safety guidelines are scheduled to be adopted in July. One of Japan’s largest-ever protests saw 170,000 people gather in a similar fashion in July 2012, around the same time that then-Prime Minister Yoshihiko Noda decided on the first two reactor restarts since the March 2011 Fukushima disaster. As of now, the anti-nuclear protestors say they have collected over 8 million signatures of those opposed to reactor restarts.

As they marched through the streets, the protestors carried signs and banners that had messages such as “No Nukes! Unevolved Apes Want Nukes!” As of today, the two reactors that were restarted last summer, located in Oi, Fukui Prefecture, are the only ones out the country’s 50 that have returned to operation. While Sunday’s rally was organized between three different groups, Kyodo news reported that the Tokyo Metropolitan Police Department had put the number of protesters between 20,000 and 30,000.