Great barriers do exist in space and Voyager may have reached one: now what? 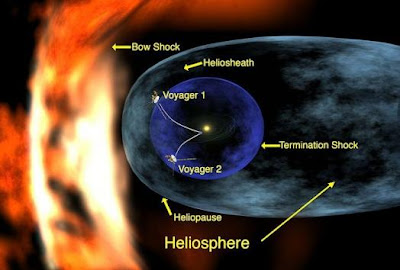 Launched 36 years ago, the Voyager 1 spacecraft speeds a rate of about a million miles a day entering a bizarre and mysterious region more than 11 billion miles from Earth that scientists are struggling to make sense of.


It’s a region where the fierce solar winds have all but vanished and pieces of atoms blasted across the galaxy by ancient supernovae drift into the solar system, the NASA probe is causing scientists to question some long-standing theories on the nature of our solar system and life beyond its cold dark edge dubbed the “magnetic highway” –a newly discovered area of the heliosphere, the vast bubble of magnetism that shields the solar system from deadly cosmic rays. Scientists had long envisioned this outermost layer of the solar systems, the heliosheath, to be a curved, distinct boundary separating the solar system from the rest of the Milky Way where three things would happen: 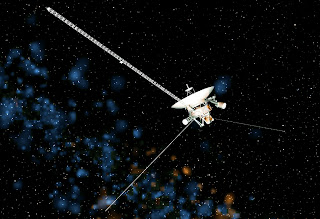 But the latest readings from Voyagers instruments support none of those suppositions, scientists said. Voyager has reported solar winds suddenly dropped by half, while the strength of the magnetic field almost doubled, and those values then switched back and forth five times before they became fixed. “The jumps indicate multiple crossings of a boundary unlike anything observed previously,” a team of Voyager scientists wrote in one a study.

Voyager did detect the expected increase in galactic cosmic rays but found at times the rays were moving in parallel instead of traveling randomly. “This was conceptually unthinkable for cosmic rays,” Stamatios Krimigis, a solar physicist at the Johns Hopkins University Applied Physics Laboratory in Laurel, Md., told the Los Angeles Times. “There is no cosmic ray physicist I know who ever expected that they would not all be coming equally from all directions.” Whether Voyager 1 — which launched in 1977 — has truly left the solar system has been a matter of some debate, because scientists have come up with competing theories on what constitutes in outermost edge. “We’re not free yet,” Krimigis said. “This is a new region that we didn’t know existed. We have no road map, and we’re waiting to see what’s going to happen next.”