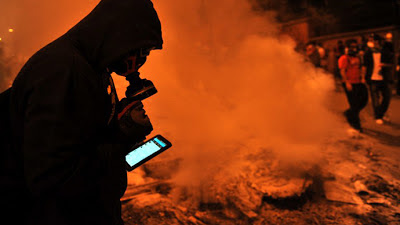 Turkish police have detained at least 25 Twitter users for allegedly spreading false reports, as anti-government demonstrations in Turkey continue for a sixth day.


Social media activists have been accused of using Twitter to “instigate public hatred and animosity,” according to Turkish media. Police raided 38 addresses to locate the suspects.

The activists were arrested early Wednesday in the western city of Izmir. Police said that their tweets contained “misleading and libelous information,” state-run news agency Anatolia reported. However, Ali Engin, an official from the main opposition Republican People’s Party (CHP), said that they were detained for urging people to protest.

Police tracked down the activists through their IP addresses, and were reportedly able to locate most of them. CHP said that they have sent lawyers to assist the arrested individuals.

The lawyers revealed to the media that police files on the individuals included tweets about where to meet, about police actions, and about the names of volunteer doctors and lawyers.

Earlier on Tuesday, Turkish Deputy Prime Minister Bulent Arinc apologized for the treatment of protesters during riots that grew out of a demonstration last Friday against the planned demolition of Taksim Gezi Park to build a mall. The police use of teargas and pepper spray to disperse protesters has been heavily criticized.

Arinc said that the police’s actions were wrong, and that security forces have been ordered not to use teargas except in cases of self-defense. "The excessive violence that was used in the first instance against those who were behaving with respect for the environment is wrong and unfair. I apologize to those citizens," Arinc said at a news conference on Tuesday.

After unrest began last Friday, tens of thousands of anti-government protesters held demonstrations in Istanbul, Ankara, Izmir, Mugla, Antalya, and many other cities and towns across Turkey. At least two people were killed and thousands were injured in the nationwide protests.

The demonstrations continued on Wednesday, with protesters surrounding the offices of Turkish Prime Minister Tayyip Erdogan.

Twitter and other social networks have played a big role in helping demonstrators organize and share developments; the Turkish media has been roundly criticized for failing to cover the protests as they unfolded.

Prime Minister Erdogan has condemned social media’s role in the riots, singling out what he called the “scourge” of Twitter.

“There is now a menace which is called Twitter," Erdogan said on Sunday, dismissing the protests as being organized by extreme elements. "The best examples of lies can be found there. To me, social media is the worst menace to society."