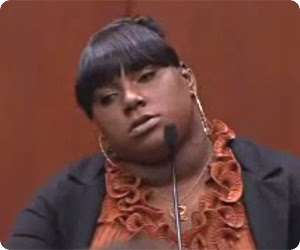 
Here is a 19-year-old high school senior, raised in America and educated in public schools, who is wildly illiterate (she simply cannot read) and who seems unable to speak in coherent sentences. Almost right out of the movie Idiocracy, she makes odd grunting noises and seems to display wild emotional swings, verbal inconsistencies and irrational behavior. See a video of her testimony below.

Not surprisingly, she is being trashed all over the internet by all sorts of people who say she's "speaking Ebonics" or other accusations. But the truth of all this is far deeper and far more disturbing: Rachel Jeantel is actually a VICTIM of our modern-society society of brain-damaging poisons. And chances are that most of the people commenting on Rachel are victims, too, although to a lesser degree (because we're all being poisoned...)

In this article, I'm going to reveal how food and medicine corporations are knowingly and repeatedly poisoned all Americans with a toxic cocktail of brain-damaging substances. Rachel appears to be one of the more severe cases of brain damage caused by these substances, but there are many other victims of all races who have suffered similar fates.

Here's a sample of some of her testimony, so you can observe this for yourself:


How brains of young black women get poisoned

So how does a young black woman like Rachel Jeantel get so poisoned to the point where she can hardly speak coherent sentences?

• Aspartame - Rachel is likely a diet soda drinker, and diet soda is made with aspartame. Aspartame breaks down into formaldehyde (and other components), a potent neurotoxin that causes brain damage.

• Vaccines - the CDC continues to admit that vaccines contain mercury, one of the most neurotoxic substances known to modern science. Just one injection can cause permanent brain damage.

On the issue of lead, Rachel's behavior strongly resembles that of a lead-poisoned individual. This isn't just a one-time exposure issue, either: it's a chronic exposure during childhood development issue.

It's possible she actually ate lead paint as a child, for example, if she was living in a much older house where the paint was flaking off. (Lead was removed from paint in 1978, but many homes still contain that lead-based paint.)

What's also disturbing in all this is that many defenders of Rachel Jeantel are trying to say that "white people just don't understand her cultural difference."

Since when did brain damage become a "cultural difference?" What an insult to blacks! The woman is a victim, folks. She's been poisoned. It is an insult to the black community to insist that "all black people are incoherent." No they aren't, because most people are not brain damaged to that extent. I feel sorry for Jeantel for being the victim of a society full of poisons, and I'm also shocked at how so many people are rushing to her defense and claiming that her illiteracy and incomprehensibility is essentially just "a black thing."

No, it isn't a black thing. It's a brain damage thing. She's a victim, folks, and there are young white victims of the same poisoning who are just as incomprehensible as Jeantel.

Am I the only one who thinks that healthy young black people are naturally intelligent? Because apparently we're now supposed to believe that "all black people talk that way," and that's the most racist thing I've ever heard coming out of the mouths of black folks.

In addition to being poisoned by fluoride, lead, aspartame and vaccines, Jeantel is obviously eating a diet that is completely lacking in the nutrients needed to protect the brain from oxidative damage.

Selenium is the key nutrient here. It's so powerful that it actually stops brain damage from taking place. Because selenium is a trace mineral that's never added back into agricultural fields, it is almost completely missing in mainstream foods.

If you look at Jeantel, you can obviously tell she's a frequent consumer of fast food, and that means she's getting zero selenium. So her brain is completely vulnerable to damage from all the neurotoxins mentioned earlier.

I'm willing to bet that if you take hair samples from Jeantel and have them analyzed, they will show virtually zero selenium.

Her diet is almost certainly devoid of other crucial nutrients for neurological function as well: omega-3 oils, vitamin C, zinc, magnesium, vitamin D and so on. She's eating the "standard American diet" which practically sets you up for severe brain damage when you're exposed to fluoride, aspartame and vaccines.

When you watch Jeantel attempt to speak in something resembling coherent sentences, remember that you are watching a victim of institutional poisoning in America. You're also watching the future of America if we don't eliminate all these poisons from our food, medicine and environment.

In fifty years, Jeantel will look like a genius compared to the babbling, incoherent, Idiocracy kids we'll have running around the streets. (A future democratic president will probably make someone like her the Secretary of Education -- that's a reference to Idiocracy, a must-see movie.)

As a society, we are being mass poisoned through our foods, medicines and toxic home construction materials (glues, formaldehyde, etc.) We're being denied real nutrition because the foods available to us are nutrient depleted. And then you've got people out there trying to make everybody think "vitamins might kill you" and therefore you should never supplement your nutrition.

Rachel Jeantel is what you end up with when our children suffer mass exposure to so many poisons: A brain-damaged victim with extremely limited learning capacity and nearly incomprehensible speech, regardless of race or skin color.


Get the poisons out of our food and medicine!

We should pray for people like Jeantel. Even further, we should engage in whatever level of activism it takes to get the poisons out of our food and medicine! Haven't the food companies poisoned enough children yet? Haven't they given enough children autism, or put them into comas?

Where does it end? We are fast heading toward a time when 25% of young boys will be autistic. Just as many young girls will be mentally retarded. The U.S. government is doing absolutely nothing to stop this, and in fact agencies like the USDA and FDA actively defend the food industry poisoning our foods.

Until we stop poisoning our children, this is not going to stop. Rachel Jeantel is the canary in the coal mine, warning us all of the disturbing degree of brain damage that's already being inflicted on our children. She is a victim of institutionalized poisoning.

It's not a culture thing, it's a poison thing. Get it? More than just a witness for the defense, Rachel Jeantel is an exhibit of the consequences of having your food and medicine routinely poisoned with brain-damaging substances.