France, Britain Confirms Use of Sarin Gas in Syria

France said Tuesday it has confirmed that the nerve gas sarin was used "multiple times and in a localized way" in Syria, including at least once by the regime. [updated]


It was the most specific claim by any Western power about chemical weapons attacks in the 27-month-old conflict.

Britain later said that tests it conducted on samples taken from Syria also were positive for sarin.

The back-to-back announcements left many questions unanswered, highlighting the difficulties of confirming from a distance whether combatants in Syria have crossed the "red line" set by President Barack Obama. The regime of Syrian President Bashar Assad has refused to allow U.N. investigators into the country.

The French and British findings, based on samples taken from Syria, came hours after a U.N. team said it had "reasonable grounds" to suspect small-scale use of toxic chemicals in at least four attacks in March and April.

The U.N. probe was conducted from outside Syria's borders, based on interviews with doctors and witnesses of purported attacks and a review of amateur videos from Syria. The team said solid evidence will remain elusive until inspectors can collect samples from victims directly or from the sites of alleged attacks.


At the same time, forensic evidence of alleged chemical weapons use is fading away with time, and the longer U.N. inspectors are kept out of Syria, the harder it will be to collect conclusive proof, they said. 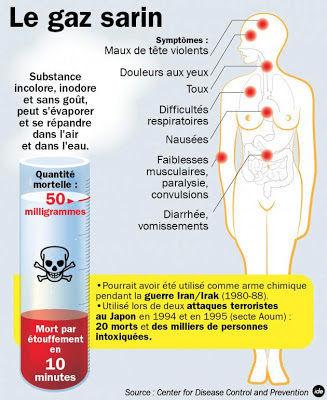 Syria is suspected of having one of the world's largest chemical weapons arsenals, including mustard and nerve gas, such as sarin. In recent weeks, the regime and those trying to topple Assad have increasingly used accusations of chemical weapons use as a propaganda tool, but have offered no solid proof.

In the West, meanwhile, the lack of certainty about such allegations is linked to a high stakes political debate over whether the U.S. should get more involved in the Syria conflict, including by arming those fighting Assad.

Obama has been reluctant to send weapons to the Syrian rebels, in part because of the strong presence of Islamic militants among them. Obama has warned that the use of chemical weapons or their transfer to a terrorist group would cross a "red line," hinting at forceful intervention in such an event.

Yet he has insisted on a high level of proof, including a "chain of custody," that can only come from on-site investigations currently being blocked by the regime.

In Tuesday's announcement about sarin, French Foreign Minister Laurent Fabius said his government had analyzed several samples, including some brought back from Syria by reporters from the Le Monde newspaper.

He said that there was "no doubt" that at least in one case, the regime and its allies were responsible for the attack. "We have integrally traced the chain, from the attack, to the moment people were killed, to when the samples were taken and analyzed," Fabius told the TV station France 2.

He said a line was crossed and that "all options are on the table," including intervening "militarily where the gas is produced or stored."

In London, Britain's Foreign Office said samples from Syria were tested at a government laboratory and that the presence of sarin was confirmed. It did not say when or where the samples were obtained.


US intelligence has concluded "with some degree of varying confidence," that the Syrian government has used sarin gas as a weapon in its 2-year-old civil war, defense secretary Chuck Hagel said on Thursday.

Hagel, speaking to reporters in Abu Dhabi, said the White House has informed two senators by letter that, within the past day, "our intelligence community does assess, with varying degrees of confidence, that the Syrian regime has used chemical weapons on a small scale in Syria, specifically, the chemical agent sarin."

"It violates every convention of warfare," Hagel said.

No information was made public on what quantity of chemical weapons might have been used, or when or what casualties might have resulted.

President Barack Obama has said the use of chemical weapons would be a "game changer" in the US position on intervening in the Syrian civil war, and the letter to Congress reiterates that the use or transfer of chemical weapons in Syria is a "red line for the United States." However, the letter also hints that a broad US response is not imminent.

White House legislative director Miguel Rodriguez, who signed the letter, wrote that "because the president takes this issue so seriously, we have an obligation to fully investigate any and all evidence of chemical weapons use within Syria."

The letters went to senators John McCain and Carl Levin.

The assessment, Rodriguez says, is based in part on "physiological samples."

He also said the US believes that the use of chemical weapons "originated with the Assad regime." That is consistent with the Obama administration's assertion that the Syrian rebels do not have access to the country's stockpiles.

In Washington, McCain quoted from the letter the White House sent to several senators who had pressed the administration about Syria's possible use of chemical weapons.

"We just received a letter from the president in response to our question about whether Assad had used chemical weapons," McCain told reporters following a closed briefing with secretary of state John Kerry on Syria and North Korea.

UN experts say they do not confirm the claims by the United States, France and Britain that the Syrian government has used chemical weapons against the militants.


"We are not able to say who has used chemical agents or chemical weapons,” said Paulo Pinheiro, chairman of the United Nations human rights investigation committee on Syria, on Friday.

Speaking to reporters after an informal meeting with UN Security Council ambassadors, Pinheiro said he would not comment on evidence, including multiple blood, tissue and soil samples, that the US, Britain and France have sent to the UN about the possible use of chemical weapons in Syria.

The technical data presented by the three countries is of limited value to the UN which, according to its rules, can pass a final judgment on the situation only after its own inspectors personally collect evidence.

Based on the unsubstantiated claim that the Syrian government has used chemical weapons against the militants, President Barack Obama ordered the CIA last week to provide arms to the anti-Syrian groups, saying the government of President Bashar al-Assad had crossed Washington’s red lines.

In an article on the Washington Post on Friday, Colum Lynch and Joby Warrick write that the US move “rests on unverifiable claims” that lack transparency.

Weapons experts say Obama’s declaration of Washington’s red line in terms of more involvement in Syria “handed the Syrian opposition a powerful incentive to fabricate evidence” against the Assad government regarding the chemical arms use, the article said.

“If you are the opposition and you hear” that the White House has drawn a red line on the use of nerve agents, then “you have an interest in giving the impression that some chemical weapons have been used,” said Rolf Ekeus, a Swedish scientist who headed UN weapons inspections in Iraq during the 1990s, the article read.