CIA launching a new campaign to stop leakage of their secrets 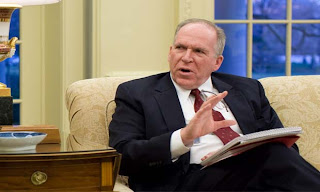 CIA Director John Brennan is launching a new campaign aimed at pressuring CIA officers to keep the intelligence agency’s secrets secret, after a series of leaks to the media.

In a memo to the CIA workforce this week, Brennan says the “Honor the Oath,” campaign is intended to “reinforce our corporate culture of secrecy” through education and training. The Associated Press obtained the memo Wednesday, marked unclassified and for official use only.

The review concluded the CIA also needs to be tougher with pre-publication review of articles or books by former employees.

Email ThisBlogThis!Share to TwitterShare to FacebookShare to Pinterest
Labels: CIA