A Look Inside The Modern Day Meat Industry: A Worldwide Genocide 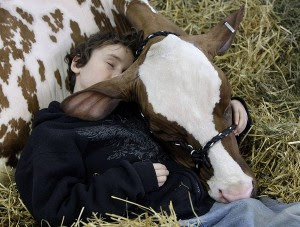 I’m sure many of you reading this are aware of the atrocities committed against animals on a worldwide scale within the modern day meat industry.


According to the US department of Agriculture, nearly 10 billion animals are raised and killed for food consumption each year in the United States alone.

There are some very graphic videos floating around out there on the internet, they are extremely hard to watch and I didn’t want to post anything overly graphic. On the other hand, it’s hard to find footage that isn’t  graphic at all. Sometimes a good shock to the system can be beneficial to people, and really have them get in touch with their soul and have them question what they are doing.

I chose this video because it was one of the least graphic videos I could find that (at the same time) did a good job in illustrating the point i’m trying to get across. What we are doing here is not conducive to our natural state, nobody is born to accept this, we are simply programmed by mass media, addictive chemicals and programming as we grow older. What happens in the modern day meat industry is unnecessary, cruel and heartbreaking.

I also chose this video because I like the ending, it does a great job in stepping outside and playing the observer role. What are we doing here on planet Earth? Is it really necessary? It really hits you when you see it, so make sure you watch the video until the end.

All beings on this planet deserve the right to live, all of them have feelings, emotions and intelligence just like we do. They are full of love, compassion and care. We are supposed to live in harmony with them. If we don’t speak for them, who will?

Apart from empathy, there are multiple reasons not to consume meat and dairy, please browse through our health and alternative news sections for more information. Or simply use our search bar using key words such as “meat” or diary”.

I dream of a planets where the beings that reside on it live in harmony side by side. That would be a lovely energy to bask in, wouldn’t it? Maybe on some of those other “Earth-like” planets out there ,  they get it and live in harmony with one  another. If we are to move forward, we will have to learn to live in this manner.

This video does not illustrate the atrocities that go on inside of slaughter houses. I did not want to post them as they are extremely graphic and hard to watch. Hopefully this article/video alone will inspire others to further their research. What happens within those walls is animal torture.

I believe I am not interested to know whether vivisection produces results that are profitable to the human race or doesn’t. To know that the results are profitable to the race would not remove my hostility to it. The pain which it inflicts upon non consenting animals is the basis of my enmity toward it, and it is to me sufficient justification of the enmity without looking further –
Mark Twain

Non violence leads to the highest ethics, which is the goal of all evolution. Until we stop harming all other living beings, we are still savages –
Thomas Edison

Animals share with us the privilege of having a soul –
Pythagoras

If a man aspires towards a righteous life, his first act of abstinence is from injury to animals – Albert Einstein

“Pigs on the kill floor have come up and nuzzled me like a puppy. Two minutes later I had to kill them – beat them to death with a pipe.” –
Former Slaughterhouse worker