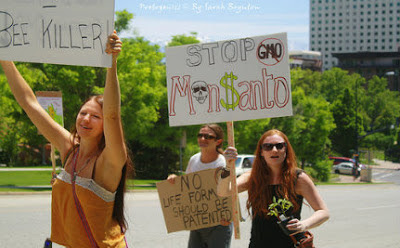 It’s almost surreal, but it’s true. Monsanto has officially give up its fight to spread genetically modified seeds and plants throughout Europe.


In a time when the power and political influence of Monsanto Co. seems nearly insurmountable, this is a huge victory for opponents of genetic engineering. For those in the U.S. and other countries where Monsanto’s stranglehold is palpable, it serves as a rally cry to keep up the good fight.

“We’ve come to the conclusion that this has no broad acceptance at the moment,” Monsanto Germany spokeswoman, Ursula Lüttmer-Ouazane, told Taz, a Geman newspaper. According to Reuters, European officials for Monsanto also told Taz “that they were no longer doing any lobby work for cultivation in Europe and not seeking any new approvals for genetically modified plants.”

Just as in the United States, millions of European citizens have spoken out against Monsanto’s unchecked control of agriculture through the use of patented, genetically-modified seeds and plants.

A recent poll in Europe found that 60% of respondents considered “Frankencrops” a threat to public health. In 2007, the United States launched a planned retaliation against European countries for refusing to take GMOs into their food chains. In 2009 Monsanto sued Germany because it banned these products, reported FarmtoConsumer.org in late 2012.

Unlike U.S. leaders, those in Germany and elsewhere were not impressed by Monsanto’s well-known intimidation tactics. By January 2013, eight European nations had publicly banned the cultivation of genetically modified crops. Earlier this month, these and other European countries joined the massive March Against Monsanto, a global event that saw millions take to the streets in protest.

For Monsanto, this latest action was apparently the last straw.

“We’re going to sell the GM seeds only where they enjoy broad farmer support, broad political support and a functioning regulatory system,” corporate spokesman Thomas Helscher told Reuters. “As far as we’re convinced this only applies to a few countries in Europe today, primarily Spain and Portugal.”

Despite Europe’s strong stand against Monsanto’s GE crops, there are plenty of countries still under its financial and political control, namely, the United States. Here’s hoping that Europe’s victory will be only the first chink in Monsanto’s armor — one that can be exploited by the relentless voices of the millions of Americans who don’t enjoy a corporation deciding what they can and cannot eat.