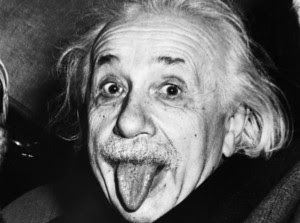 “What is the meaning of human life, or of organic life altogether?


To answer this question at all implies a religion. Is there any sense then, you ask, in putting it? I answer, the man who regards his own life and that of his fellow-creatures as meaningless is not merely unfortunate but almost disqualified for life”

So begins Albert Einstein’s The World As I See It, a collection of essays, articles and letters written between 1922 and 1934 focusing on the humane aspect of this scientific genius and revealing him as a man of compassion and wisdom acutely in tune with the problems faced by mankind, and the pressing need for science to serve the well-being of humanity, an ideal it clearly no longer serves.


There are countless documentaries out there discussing Einstein’s enduring legacy to modern science – few are unaware of his contributions to the field of theoretical physics: the general theory of relativity and the E = mc2 formula for mass-energy equivalence are perhaps universally known (if not necessarily understood). By comparison, his political and religious views go largely unmentioned, concealed beneath the giant shadow looming from his immense scientific achievements. Reading The World As I See It and it is clear that overlooking this aspect of Einstein’s life and thinking is a dramatic oversight.

On the meaning of life – a loaded subject on which “everybody has certain ideals which determine the direction of his endeavours and judgements” Einstein writes:

"The ideals which have lighted me on my way and time after time have given me new courage to face life cheerfully, have been Truth, Goodness and Beauty. Without the sense of fellowship with men of like mind, of preoccupation with the objective, the eternally unattainable in the field of art and scientific research, life would have seemed to me empty. The ordinary objects of human endeavour – property, outward success, luxury – have always seemed to me contemptible."

While Einstein supported the political model in the United States of America (a very different beast at the time of writing compared to today) his sense of social justice prevented him from perceiving the State as superior to man himself.

"The really valuable thing in the pageant of human life seems to me not the State but the creative, sentient individual, the personality; it alone creates the noble and the sublime, while the herd as such remains dull in thought and dull in feeling."

Moreover, he saw how the shortcomings of political systems undermined culture and society.

"The lack of outstanding figures is particularly striking in the domain of art. Painting and music have definitely degenerated and largely lost their popular appeal. In politics not only are leaders lacking, but the independence of spirit and sense of justice of the citizen have to a great extent declined. The democratic, parliamentarian regime, which is based on such independence, has in many places been shaken, dictatorships have sprung up and are tolerated, because men’s sense of dignity and the rights of the individual is no longer strong enough. In two weeks the sheep-like masses can be worked up by the newspapers into such a state of excited fury that the men are prepared to put on an uniform and kill and be killed, for the sake of the worthless aims of a few interested parties. Compulsory military service seems to me the most disgraceful symptom of that deficiency in personal dignity from which civilized mankind is suffering today."

Einstein’s unequivocal condemnation of the military is clear – he views it as an institution which represents the ultimate debasement of the human spirit.

"That a man can take pleasure in marching in formation to the strains of a band is enough to make me despise him. He has only been given his big brain by mistake; a backbone was all he needed … Heroism by order, senseless violence, and all the pestilent nonsense that goes by the name of patriotism – how I hate them!"

Yet he recognized the dynamics which created the perpetual state of military “necessity”.

"The armament industry is one of the greatest dangers that beset mankind. It is the hidden evil power behind the nationalism which is rampant everywhere."

In later life, true enough, Einstein supported the Manhattan Project and the creation of the atom bomb, but did so only out of the sense of a pressing need to develop one before the Germans did. Doubtless, he would have been unaware at the time – as most were – of the ties between the American establishment and the Nazis.

The admittedly significant moral dilemma of the atom bomb aside, Einstein’s pacifism is clear in his earlier writings, as is his awareness of its potential shortcomings.

"A pacifism which does not actually try to prevent the nations from arming is and must remain impotent. May the conscience and the common sense of the people be awakened, so that we may reach a new stage in the life of nations, where people look back on war as an incomprehensible aberration of their forefathers!"

"We cannot despair of humanity, since we ourselves are human beings."

He also understood that the problem permeated through all aspects of life, perhaps more significantly today than when he wrote these letters.

"Exaggerated respect for athletics, an excess of coarse impressions which the complications of life through the technical discoveries of recent years has brought with it, the increased severity of the struggle for existence due to the economic crisis, the brutalization of political life – all these factors are hostile to the ripening of the character and the desire for real culture, and stamp our age as barbarous, materialistic, and superficial."

But underneath it all at the heart of Einstein’s thinking seems to lie a deeply profound understanding of man’s true potential to be a fully realized spiritual being. He views man’s progression from religions of fear to ones of morality as a great step, and envisions a new religion emerging in the distance.

"The religion of the future will be cosmic religion. It will transcend personal God and avoid dogma and theology."

In an era when quantum physics is rapidly making discoveries which have huge implications for metaphysics, Einstein too saw the connection between science and spirit.

"Every one who is seriously involved in the pursuit of science becomes convinced that a spirit is manifest in the laws of the Universe – a spirit vastly superior to that of man, and one in the face of which we with our modest powers must feel humble."

And our place in this, according to Einstein’s view?

"A human being is a part of the whole called by us universe, a part limited in time and space. He experiences himself, his thoughts and feeling as something separated from the rest, a kind of optical delusion of his consciousness. This delusion is a kind of prison for us, restricting us to our personal desires and to affection for a few persons nearest to us. Our task must be to free ourselves from this prison by widening our circle of compassion to embrace all living creatures and the whole of nature in its beauty."


Related:
The universe is comprised of information & energy, how to use it.
David Wilcock : The Synchronicity Key
Living In A Hologram: Our Holographic Reality
Understanding Multiple Dimensions From Our Third Dimensional Perspective