15 People With Shitty Lives Who Are Happier Than You Are

Right now there’s a guy doing life in prison who’s more free and happy than every single person you ran into today, including you, me, and the dude who’s got it all.


Right now there’s a woman with no arms and no legs enjoying her life far beyond what you or I can even fathom.

Right now there’s woman who was sexually abused her entire childhood who’s making a more positive impact on people’s lives than any best-selling self-help guru who’s ever promised you that you can “have it all.”

Right now there are little children playing hide-and-go-seek in a war zone with bullets flying over their heads who are more optimistic about their future than any one of the success-driven Americans repeating feel-good affirmations of personal prosperity while staring at vision boards covered with images of perfect bodies, dream homes and private jets.


Right now there’s a guy so miserable with his Barbie-doll wife that he’s trying to find some thug he can pay to “just get rid of her.” Right now there are also countless couples with physical deformations that most of us would consider too hideous to even look at who are so happy and in love with each other they seriously wonder if they’re living in a dream.

Right now there’s a guy on skid row who’s far richer than any of the great tycoons modern society worships.

Right now a future world champion fighter is not only being physically abused at home, but there’s a gang of bullies at school teasing him for being dumb and kicking his ass every chance they get.

Right now a young girl is pregnant with her father’s child. That father is gonna die alone and afraid and none of his family will attend his funeral. That young girl is gonna grow up to be a wonderful mother and her son is gonna go on to a be an amazing father in his own right and break the cycle of abuse that has cursed that family for generations.

Right now a 14-year-old girl is trying heroin for the first time. She will fall in love with it. After decades of misery, prison and homelessness, she will go on to help hundreds of other addicts free themselves from the blood-stained claws of addiction and go on to to lead happy lives without the use of drugs or alcohol.

Right now one of the greatest artists this world will ever know, is about 8 years old and is being told by his father that he’s nothing but a useless piece of shit and will never amount to anything. Out of his own self-hatred, that father—after telling his young son what a lowlife and waste of flesh he is—will beat this boy with a belt, like he does at least 3 days a week. This boy will go on to create art that will be adored by millions and inspire people all over the world become artists themselves.

Right now, a guy who dropped out of school in the 7th grade to support his family is all grown up and he’s building his dream business doing what he loves, putting his own kids through college, and taking care of his elderly mother.

Right now a woman who is about to change the world for the better is being told she “can’t” by everyone she knows. She does not care what they think. Because she doesn’t just think, she knows.

Right now there is a man doing life without parole for a crime he did not commit. He is at peace with himself and the world and spends his days helping other inmates get their college degrees.

Right now most people are miserable— and looking for any excuse to stay miserable. 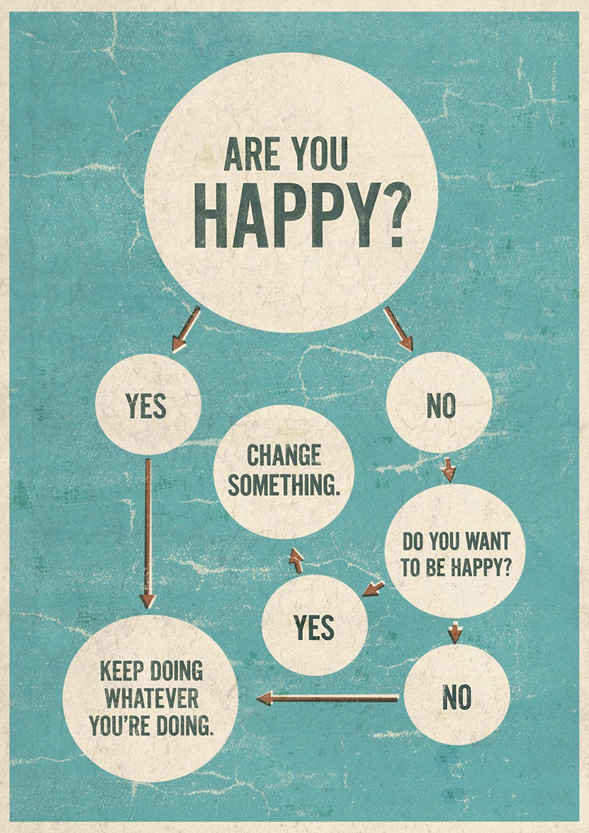 Most people don’t appreciate what they have, and believe if they just keep getting more, at some point it will enough, and they will be happy.

Every little thing is seen as a “problem.”

They don’t see that there’s food in the fridge, a roof over their heads and that there ain’t an army of badass mother fuckers on horses coming over the hill right now to burn down the village and everyone in it. (Not tonight at least.)

At no time in human history have we had it so good.

There are more opportunities than ever. Knowledge is more plentiful than ever. Tonight we can eat Chinese, Japanese, Greek, Italian, Mexican or a good ol’ American hamburger with fries and a shake.

We can get pretty much anything we need at the click of a few buttons.

There are a hundred times as many solutions out there as there are problems. People have walked through pretty much anything and everything you can imagine, and they’re willing to share how they did it—with you, me or anyone who will listen. We can learn a lot from these people. You and I are these people.

We live in an infinite universe yet we look at the world out of a tiny hole in a shoe box.

While it’s true we will never be completely free of our judgmental, self-doubting and scared little minds; that doesn’t mean we can’t see the world from a bigger hole in a bigger box. And I’m not talking about the size of the house we live in—I’m talking about the openness of our minds.

And usually it’s not the good times that open our minds—it’s the rivers of shit we crawl through.

If Dewey Bozella hadn’t spent 26 years in prison for a crime he didn’t commit, he would never have helped so many young people learn to defend themselves and avoid gangs.

If Charles Bukowski’s father had not belittled and beaten the shit out of him every chance he got, Charles probably never would have became one of the greatest writers to ever live.

If you had not gone through some of the shit you’ve gone through, you would not be the person you are— nor would you able to help people in the way you can today.

Right now there are people defying every possible odd, doing things the world told them they can’t do and living beyond the scope of all currently accepted possibility. They are not as smart as you, good looking as you, as physically strong as you and many come from families that treated them like shit.

My question to you is—what’s your fucking excuse?

I don’t know what yours is, but I know right now, mine ain’t good enough either.