Are we alone in the universe? A new look at stardust suggests just the opposite, indicating that life may be universal.


Researchers at Lawrence Livermore Lab in California used electron microscopy to examine interplanetary dust collected from Earth's outer atmosphere. They found that the tiny particles contained pockets of water -- presumably created by interactions between the dust with the so-called "solar wind."

Why is that significant? As John Bradley, director of the Institute of Geophysics and Planetary Physics at the lab and the research leader, told The Huffington Post, "The two key ingredients for life on Earth are water and organic material. These particles arrived at the top of the atmosphere with both of the key ingredients for life."

And that, the scientists wrote in a paper about their research, suggests that as long as conditions are right, the particular type of water production is a "ubiquitous process throughout the solar system."

Since water is one of the main ingredients for life, the finding suggests that life may have arisen at different times and places throughout the universe.

"The implications are potentially huge," Hope Ishii, of the University of Hawaii in Honolulu and one of the researchers, told New Scientist. "It is a particularly thrilling possibility that this influx of dust on the surfaces of solar system bodies has acted as a continuous rainfall of little reaction vessels containing both the water and organics needed for the eventual origin of life."

Solar systems are full of dust – a result of many processes, including the break-up of comets. John Bradley of the Lawrence Livermore National Laboratory in California and his colleagues inspected the outer layer of interplanetary dust particles extracted from Earth's stratosphere.

Ultra-high-resolution microscopy allowed them to probe the 5- to 25-micrometre specks of dust to reveal small pockets of trapped water just beneath the surface.

Laboratory experiments offer clues to how the water forms. The dust is mostly made of silicates, which contains oxygen. As it travels through space, it encounters the solar wind. This stream of charged particles including high-energy hydrogen ions is ejected from the sun's atmosphere. When the two collide, hydrogen and oxygen combine to make water.

As interplanetary dust is thought to have rained down on early Earth, it is likely that the stuff brought water to our planet, although it is difficult to conceive how it could account for the millions of cubic kilometres of water that cover Earth today. "In no way do we suggest that this was sufficient to form oceans," says Ishii.

A more likely origin for the huge volume of water on our planet is wet asteroids that pummelled early Earth. Comets are also a candidate: the European Space Agency's Rosetta spacecraft, due to send a lander to a comet later this year, is tasked with probing their role.

However, the Bradley team's results are relevant to the quest for life on other planets. The water-producing reaction is likely to be universal, and to happen in any corner of the universe with a star, or even a supernova, says Ishii.

What's more, interplanetary dust in our solar system – and in others – contains organic carbon. If stardust contains carbon and water, it means the essentials of life could be present in solar systems anywhere in the universe and raining down on their planets.

"These are the types of processes that we expect to occur in other planetary systems," says Fred Ciesla of the University of Chicago in Illinois, who was not involved in the work. "Water and organics are not uncommon." 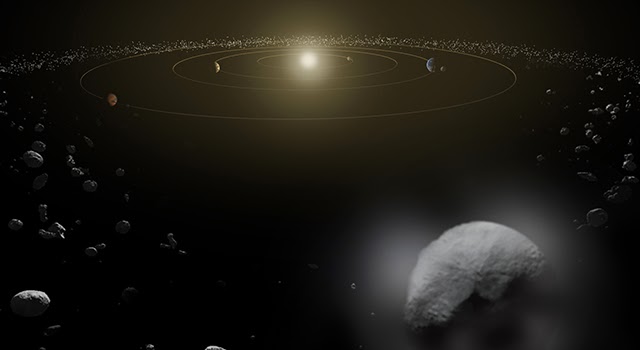 Scientists using the Herschel space observatory have made the first definitive detection of water vapor on the largest and roundest object in the asteroid belt, Ceres.

Plumes of water vapor are thought to shoot up periodically from Ceres when portions of its icy surface warm slightly. Ceres is classified as a dwarf planet, a solar system body bigger than an asteroid and smaller than a planet.

"This is the first time water vapor has been unequivocally detected on Ceres or any other object in the asteroid belt and provides proof that Ceres has an icy surface and an atmosphere," said Michael Küppers of ESA in Spain, lead author of a paper in the journal Nature.

The results come at the right time for NASA's Dawn mission, which is on its way to Ceres now after spending more than a year orbiting the large asteroid Vesta. Dawn is scheduled to arrive at Ceres in the spring of 2015, where it will take the closest look ever at its surface.

"We've got a spacecraft on the way to Ceres, so we don't have to wait long before getting more context on this intriguing result, right from the source itself," said Carol Raymond, the deputy principal investigator for Dawn at NASA's Jet Propulsion Laboratory in Pasadena, Calif. "Dawn will map the geology and chemistry of the surface in high resolution, revealing the processes that drive the outgassing activity."