The Manipulation of the Gold, Silver and Currency Markets


The big banks have conspired for years to rig interest rates … upon which $800 trillion in assets are pegged
This was the largest insider trading scandal ever … and the largest financial scam in world history.

Local governments got ripped off bigtime by the Libor manipulation
Even though RBS and a handful of other banks have been fined for interest rate manipulation, Libor is still being manipulated. No wonder … the fines are pocket change – the cost of doing business – for the big banks
But the head German financial regulator said today that manipulation in gold, silver and currencies is worse than the Libor scandal:

"Germany’s top financial regulator said possible manipulation of currency rates and prices for precious metals is worse than the Libor-rigging scandal, which has already led to fines of about $6 billion."

While this is the first time a regulator has said this, several financial writers – including Thomas Pascoe – have previously said the same thing.

Indeed, currency markets are massively rigged. And see this and this.

Gold and silver prices are “fixed” in the same way as interest rates … in daily conference calls by the powers-that-be.

Bloomberg reports:
It is the participating banks themselves that administer the gold and silver benchmarks. 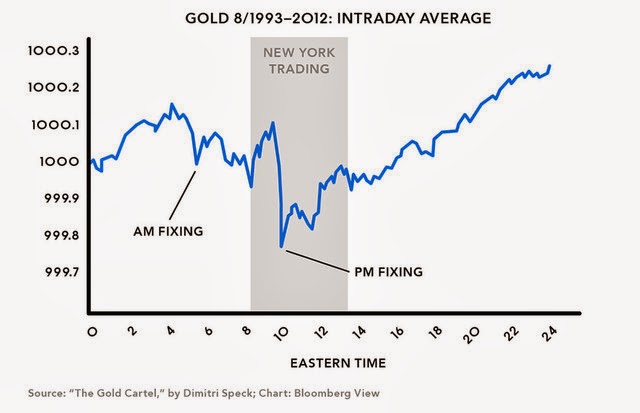 So are prices being manipulated? Let’s take a look at the evidence. In his book “The Gold Cartel,” commodity analyst Dimitri Speck combines minute-by-minute data from most of 1993 through 2012 to show how gold prices move on an average day (see attached charts).

He finds that the spot price of gold tends to drop sharply around the London evening fixing (10 a.m. New York time). A similar, if less pronounced, drop in price occurs around the London morning fixing. The same daily declines can be seen in silver prices from 1998 through 2012. 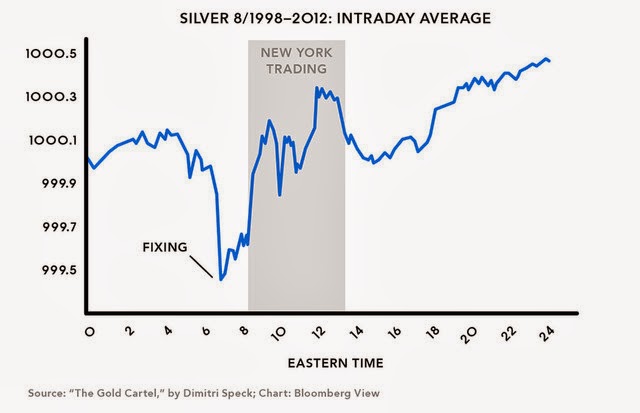 For both commodities there were, on average, no comparable price changes at any other time of the day. These patterns are consistent with manipulation in both markets.

Moreover, big private banks – and perhaps even central banks – don’t necessarily always have in their vaults all of the “allocated” gold which they claim to have on hand.

And sometimes they apparently pledge the same gold to numerous people.


And So Are Derivatives

Indeed, many trillions of dollars of derivatives are being manipulated in the exact same way that interest rates are fixed: through gamed self-reporting.

Oil prices are manipulated as well.

The Federal Energy Regulatory Commission says that JP Morgan has massively manipulated energy markets in California and the Midwest, obtaining tens of millions of dollars in overpayments from grid operators between September 2010 and June 2011.

The big banks and government agencies have been conspiring to manipulate commodities prices for decades.

The big banks are taking over important aspects of the physical economy, including uranium mining, petroleum products, aluminum, ownership and operation of airports, toll roads, ports, and electricity.

And they are using these physical assets to massively manipulate commodities prices … scalping consumers of many billions of dollars each year.


And Everything Can Be Manipulated through High-Frequency Trading

Traders with high-tech computers can manipulate stocks, bonds, options, currencies and commodities. And see this.

The big banks and other giants manipulate numerous markets in myriad ways, for example:

"[We are] living in an era of undisguised, real-world conspiracy, in which the prices of currencies, commodities like gold and silver, even interest rates and the value of money itself, can be and may already have been dictated from above. And those who are doing it can get away with it. Forget the Illuminati – this is the real thing, and it’s no secret."

The criminality and blatant manipulation will grow and spread and metastasize – taking over and killing off more and more of the economy – until Wall Street executives are finally thrown in jail.

Prepare to be blown away...

Related:
Alternative Currencies Grow in Popularity
How The British Banking Industry Became An Organised Crime Enterprise
Goldman Sachs Made 400 Million Betting On Food Prices In 2012 While Hundreds Of Millions Starved
Everything is rigged: The Biggest price-fixing scandal ever
What crisis? Billionaires’ fortunes double since 2009
How to Boycott Wall Street