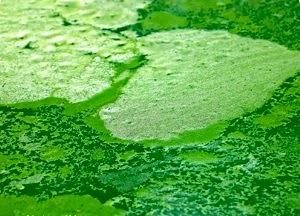 The process by which common algae is converted into usable biofuel just got a whole lot more environmentally friendly and efficient thanks to new discoveries recently made at the U.S. Department of Energy's (DOE) Pacific Northwest National Laboratory (PNNL).


Researchers there have reportedly come up with a new method of extracting crude oil from wet algae that uses no toxic chemicals and takes about an hour to complete, arguably the most significant renewable energy technology breakthrough in recent years.

The process is known as hydrothermal liquefaction, and some experts say it is the most promising advancement yet towards the eventual commercial production of usable fuel from algae. By putting harvested algae under immense and continuous pressure and heat, PNNL researchers discovered that the all-natural substance can be quickly and effectively transformed into usable crude oil, generating only clean water, nutrients and natural fuel gas as byproducts.

Published in a recent issue of the journal Algal Research, this amazing discovery and the research behind it are already generating quite a buzz within the renewable energy community. For the first time, science has given way to a process that allows for the efficient transformation of wet algae, rather than dry algae, into crude oil.

This is significant, because dry algae is expensive to produce -- so expensive, in fact, that virtually all hopes of producing energy commercially in this manner have been squelched by the prohibitively high costs involved. Producing energy from wet algae, on the other hand, is far less expensive, providing momentum for further refinements that could one day make commercial energy production from algae a reality.

"Not having to dry the algae is a big win in this process; that cuts the cost a great deal," says Douglas Elliott, the laboratory fellow who led the PNNL research team assigned to the project. "Then there are bonuses like being able to extract usable gas from the water and then recycle the remaining water and nutrients to help grow more algae, which further reduces costs."

The process, which puts wet algae under about 3,000 pounds per square inch (PSI) of pressure and heat at roughly 662 degrees Fahrenheit (350 degrees Celsius), combines what used to be several distinct chemical steps into one continuous process. This unique technique, which is the first of its kind, mimics the process by which fossil fuels were first created in the earth, and it does so without producing any toxic byproducts.

As far as the inputs required to complete the process, no chemical toxins are required for this, either. According to a recent PNNL announcement, the novel process is incredibly unique in that, unlike earlier technologies developed for energy conversion using algae, there is no need for toxic hexane or other chemical solvents to extract the usable fuel.

"It's a bit like using a pressure cooker, only the pressures and temperatures we use are much higher," adds Elliott. "In a sense, we are duplicating the process in the Earth that converted algae into oil over the course of [millennia]. We're just doing it much, much faster."

Though significantly more cost-effective than earlier incarnations, this latest technology is still cost-prohibitive compared to what is currently required to produce petroleum-based fuels, Elliott admits. But with the right refinements, the high-pressure, high-heat model of extracting fuel from wet algae has a lot of potential, he says, and continued research is sure to pay off with regard to eventually creating a cost-effective method of producing energy using this renewable method.