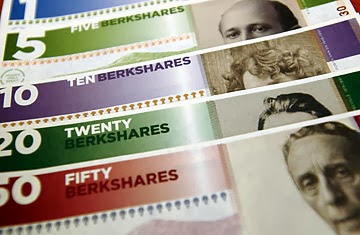 Most of us take for granted that those rectangular green slips of paper we keep in our wallets are inviolable: the physical embodiment of value.

But alternative forms of money have a long history and appear to be growing in popularity. It's not merely barter or primitive means of exchange like seashells or beads. Beneath the financial radar, in hip U.S. towns or South African townships, in shops, markets and even banks, people throughout the world are exchanging goods and services via thousands of currency types that look nothing like official tender.

Alternative means of trade often surface during tough economic times. "When money gets dried up and there are still needs to be met in society, people come up with creative ways to meet those needs," says Peter North, a senior lecturer in geography at the University of Liverpool and the author of two books on the subject. He refers to the "scrips" issued in the U.S. and Europe during the Great Depression that kept money flowing and the massive barter exchanges involving millions of people that emerged amid runaway inflation in Argentina in 2000. "People were kept from starving [this way]," he says. (Find out 10 things to do with your money.)

Closer to home, "Ithaca Hours," with a livable hourly wage as the standard, were launched during the 1991 recession to sustain the economy in Ithaca, N.Y., and stem the loss of jobs. Hours, which are legal and taxable, circulate within the community, moving from local shop to local artisan and back, rather than leaking out into the larger monetary system. The logo on the Hour reads "In Ithaca We Trust."

Alternative (or "complementary") currencies range from quaint to robust, simple to high tech. There are Greens from the Lettuce Patch Bank at the Dancing Rabbit Ecovillage in rural northeastern Missouri. In western Massachusetts one finds fine-artist-designed BerkShares, which are convertible to U.S. dollars. More than $2 million in BerkShares have been issued through the 12 branches of five local banks, according to Susan Witt, executive director of the E.F. Schumacher Society, the nonprofit behind the currency. And in South Africa, proprietary software keeps track of Community Exchange System (CES) Talents; one ambitious plan is to make Khayelitsha, a vast, desolate township of perhaps 1 million inhabitants near Cape Town, a self-sustaining community.

An alternative currency is generally used in conjunction with conventional money; one may use local currency at the farmers' market and regular greenbacks at the supermarket. "It doesn't try in any way to replace cash," says Christoph Hensch, a Swiss national and former banker living in Christchurch, New Zealand. Rather, it offers a way "for people to share and redeem value they have in the community." He says the currencies are most useful in geographical areas or social sectors where money doesn't flow sufficiently, citing, for example, New Zealand's Golden Bay, which is so remote that it sometimes nearly functions as its own economy.

Advocates of alternative currencies say they are a means of empowerment for those languishing on the margins of fiscal life, granting economic agency to people like the elderly, the disabled or the underemployed, who have little opportunity to earn money. For example, in some systems one can "bank" Time Dollars for tasks like child care and changing motor oil. It's not whether you're employed or what financial assets you have that matter, says Les Squires, a consultant on social-networking software who has been working with groups developing alternative currencies. Each person has "value" that is "exchangeable" on the basis of time spent or a given task.

Since the introduction of the European single currency, 23 different regional currencies have started circulating in Germany as people aim to revitalize local economies, lessen dependence on the euro, and challenge the established global monetary system. At least 40 more are in development.
The individual currency systems vary, but they do share some common features.

For example, retailers who accept them usually agree to bear a small loss — around three to five percent — in exchange for the increased business the currency is supposed to provide. Most of the currencies also lose value over time if they are not spent, supposedly an effort to encourage people to spend more. Some of the currencies also help fund charitable activities.

The phenomenon of alternative currencies is spreading, and not only with the (current) worldwide success of the bitcoin, which is growing more popular in the Netherlands.

In the Netherlands, Amsterdam has the makkie, which started up in 2013, joining the older noppes currency from the nineties. In the last three years, plans have been made to get the gulden in Groningen, gelre in Gelder, achthoeker in Achterhoeke, zonnemunt in Leiden, bataaf in Nijmegen and schokker in the Noordoostpolder off the ground, with varying amounts of success.
Now people in Rotterdam have developed two different local currencies to the euro.

Europeans are fed up of austerity, and there is a growing distrust of the Euro. Increasingly people are turning to alternative currencies and barter. In France more than 20 complimentary currencies are in everyday use across the country.

The video is a good overview of what is happening in Europe right now. The details on alternative currencies start at 2.13 into the video.

Learn more about 10 kinds of alternative currency in use today, from Kemp-Robertson’s talk and beyond.

Bitcoin. The world’s best-performing currency, according to Kemp-Robertson, Bitcoin’s value is tied to the performance of a computer network. It’s “completely decentralized—that’s the sort of scary thing about this—which is why it’s so popular,” Kemp-Robertson says. “It’s private, it’s anonymous, it’s fast, and it’s cheap.” Bitcoin is a case study in the increasing desire to place trust in technology over traditional institutions like banks.
.
Litecoins. A virtual currency based on the Bitcoin model, Litecoins have a higher limit: “The number of coins that can be mined is capped at 21 million Bitcoins and 84 million Litecoins,” explained a recent Wall Street Journal post, which also noted that Bitcoins are worth more and currently accepted more widely.
.
BerkShares. While Bitcoin and Litecoins are worldwide currencies, BerkShares are hyper-local: they’re only accepted in the Berkshires, a region in western Massachusetts. According to the BerkShares website, more than 400 Berkshires businesses accept the currency, and 13 banks serve as exchange stations. “The currency distinguishes the local businesses that accept the currency from those that do not, building stronger relationships and greater affinity between the business community and the citizens,” the site reads.
.
Equal Dollars. Philadelphia is also trying out a local currency with Equal Dollars. When you sign up to participate, you receive 50 Equal Dollars; to earn more, you can offer your own possessions in an online marketplace, volunteer or refer friends.
.
Ithaca Hours. Another hyperlocal currency, Ithaca Hours—usable only in Ithaca, New York—also hopes to boost “local economic strength and community self-reliance in ways which will support economic and social justice, ecology, community participation and human aspirations.” (For a full list of local currencies in the US, go here.)
.
Starbucks Stars. Use of Starbucks’ Stars is limited not to a particular geographic locality, but to the corporate ecosystem that is Starbucks. Once you get a Starbucks Card, you can earn Stars—which buy drinks and food—by paying with the card, using the Starbucks app, or entering Star codes from various grocery store products. According to Kemp-Robertson, 30 percent of transactions at Starbucks are made using Stars.
.
Amazon Coins. Another company-specific currency, Amazon Coins, can be exchanged for “Kindle Fire apps, games, or in-app items.” You get 500 Amazon Coins, worth $5, by purchasing a Kindle Fire, or can buy more Coins at a slight savings.
.
Sweat. Kemp-Robertson points to a particularly innovative business-specific currency in Nike’s “bid your sweat” campaign in Mexico. Your movements, energy, and calorie consumption are tracked and can be exchanged for goods, ensuring a “closed environment”—only people who (a) own and (b) use their Nike products are welcome.
.
Tide detergent. This is a barter system that’s about as far from government-backed as you could get: in 2011, it was discovered that across the US, thieves had been stealing 150-ounce bottles of Tide detergent to trade for $5 cash or $10 worth of weed or crack cocaine. An article in New York Magazine from earlier this year details the fascinating story and what it says about Tide’s super-successful branding.
.
Linden Dollars. Linden Dollars, usable within the online community Second Life
, can be bought with traditional currency or earned by selling goods or offering services to other Second Life residents. Many people earn actual Linden salaries—some to the tune of a million Linden Dollars—says this article from Entrepreneur.com.
.
BONUS: Brownie Points. Granted by the universe as a reward for good deeds. Not exchangeable for tangible goods, just self-satisfaction, which we think is also important.