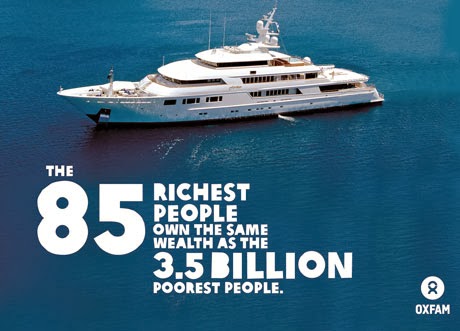 Almost half of the world’s wealth is now owned by just one percent of the population, and seven out of ten people live in countries where economic inequality has increased in the last 30 years. The World Economic Forum has identified economic inequality as a major risk to human progress, impacting social stability within countries and threatening security on a global scale.

The world’s 85 wealthiest people have as much money as the 3.5 billion poorest people on the planet – half the Earth’s population. That’s according to Oxfam’s latest report on the risks of the widening gap between the super-rich and the poor.

The report, titled “Working for the Few,” was released Monday, and was compiled by Oxfam – an international organization looking for solutions against poverty and injustice.

The document focuses on the extent of global economic inequality caused by rapidly increasing wealth of the richest people that poses the threat to the “human progress.”

A total of 210 people became billionaires last year, joining the existing 1,426 billionaires with a combined net worth of $5.4 trillion.

"Instead of moving forward together, people are increasingly separated by economic and political power, inevitably heightening social tensions and increasing the risk of societal breakdown," the report stated.

Also, according to the Oxfam data, the richest 1 percent of people across the globe have $110 trillion, or 65 times the total wealth of the bottom half of the planet’s population – which effectively “presents significant threat to inclusive political and economic systems.”

“It is staggering that, in the 21st century, half of the world’s population — that’s three and a half billion people — own no more than a tiny elite whose numbers could all fit comfortably on a double-decker bus,” Oxfam chief executive Winnie Byanyima told a news conference.

And the number of the rich is steadily growing: for example, in India the number of billionaires skyrocketed from six to 61 in the past 10 years, and their combined net worth is currently $250 billion.

The report comes ahead of the World Economic Forum in Davos which begins later this week, and urges the world leaders to discuss how to tackle this pressing issue.

Among the solutions presented by Oxfam are measures to avoid tax dodging and using economic wealth to pressure governments, looking for political benefits. Also, the organization calls for “making public all the investments in companies and trusts for which they are the ultimate beneficial owners,” as well as “challenging governments to use tax revenue to provide universal healthcare, education and social protection for citizens.”

Oxfam also said that there are many laws that favor the rich, which were lobbied for in a “power grab” by the world’s wealthiest people.

Since the late 1970s, tax rates for the richest have fallen in 29 out of 30 countries for which data are available, according to Oxfam.

"A survey in six countries (the US, UK, Spain, Brazil, India and South Africa) showed that a majority of people believe that laws are skewed in favor of the rich," the report said.

For instance, almost 80 percent of the Spanish and the Indians, as well as over 60 per cent of the US and the UK residents, either agree or strongly agree that “the rich have too much influence over where this country is headed.”

Related:
What crisis? Billionaires’ fortunes double since 2009
Everything is rigged: The Biggest price-fixing scandal ever
Alternative Currencies Grow in Popularity
How to Boycott Wall Street
Euro Group Head: Looting of Bank Accounts a “Template For EU”