Parallel Worlds exist and will soon be testable, expert says 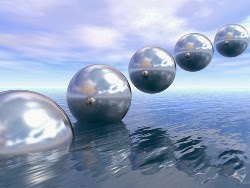 Is there another you reading this article at this exact moment in a parallel universe?


Dr. Brian Greene, author of The Hidden Reality: Parallel Universes and the Deep Laws of the Cosmos, believes that this freakish quirk of nature may exist; and he discusses its amazing possibilities in this 3-minute TV interview.

A growing number of cosmologists agree with Greene that we are but one of many universes and at least one of these other worlds lies close to ours, maybe only a millimeter away. We can't see this world, because it exists in a type of space different from the four dimensions of our everyday reality.

MIT's Max Tegmark believes this multiverse model of 'many universes' is grounded in modern physics and will eventually be testable, predictive and disprovable. "This is not sci-fi," he says, "its real science."

As research at the CERN Large Hadron Colliderprogresses, scientists are talking increasingly of a "new physics" on the horizon, which promise to help researchers understand more of the unknowns about our universe. This new approach includes developing a better understanding of dark energy, a mystery force that some forward thinkers believe indicates that a 'sister' universe lurks in our neighborhood.

Strange happenings have been observed by cosmologists such as the Andromeda galaxy, 2.2 million light-years away speeding towards the Milky Way at 200,000 mph. This phenomenon makes sense logically if gravity leaking from an invisible universe were pulling the two galaxies together.

Researchers at the WMAP space telescope recently discovered a force 10,000 times larger than the Milky Way, which they believe offers powerful evidence that a parallel universe may be in the area.

In another attempt to search for parallel worlds, NASAinstalled the Alpha Magnetic Spectrometer-2 at the ISS to record data that may prove the existence of other universes, some of which might even be made of anti-matter. Unraveling this cosmic mystery has attracted worldwide interest. The project draws support from most EU nations; plus Taiwan, China, Russia, and the U.S.

Could we ever visit another universe? In a recent PBS interview, Riddles of the Universe, USCcosmologist Clifford Johnson said he thought it OK to discuss this in the context of fiction (see FOX TV's Fringe), but it's also something that scientists can explore. Some suggest that the stuff we're made of – matter and the forces of our gravity and magnetism – are the elements that glue us to this universe.

They don't allow us to leave our 4-dimensions of moving back and forth, up and down, left to right; and sense of time. Another universe may exist close by, but in order for us to observe or communicate with it; we must first understand its different dimensions. We might envision them as "new kinds of sideways."

However, gravity seems to pervade all universes, and it may one day become possible to communicate with other universes through some futuristic gravitational manipulation. How might we feel if a parallel world is discovered? Johnson says, "It may make me feel less unique as a person, or maybe grateful; because many things I've not found time for are maybe being done by a copy of me somewhere else!"

Greene adds that some universes may be almost indistinguishable from ours; others may contain variations of all of us, where we exist but with different families, careers, and life stories. In still others, reality may be so radically different from ours as to be unrecognizable.

Experts predict that as the coming decades unwind, with intelligence advancing exponentially, this 'over-the-top' concept will one day become a proven fact. Imagine visiting another Earth where an alternate you is living a more rewarding life than yours, and you could trade places if you both agreed.

This begs the question, "What might happen if our parallel selves met; would we combine our differences to become better humans, or would we compete against one another?"

When might connecting to parallel universes be possible? With resolve and good fortune, some experts predict this incredible feat could be achieved by as early as 10 years; others less enthusiastic, believe the technologies necessary for this to happen could fall into place over the next 50-to-100 years. Stay tuned.


Related:
“High Likelihood” Of Life Beyond Our World: U.S Congress Assembles To Discuss Extraterrestrial Life
Second Solar System Detected
The Illusion Of Matter: Our Physical Reality Isn’t Really Physical At All
Quantum Entanglement May Link Wormholes in the Universe