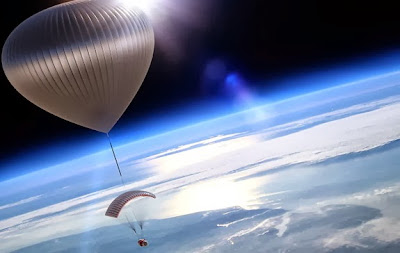 You don't have to climb aboard a rocket ship to be a space tourist anymore.


World View Enterprises of Tucson, AZ, plans to offer suborbital spaceflight in a capsule lifted by balloon to 18.6 miles (30 km), which then glides back to Earth.

For $75,000, a company called World View Enterprises will loft you 19 miles (30 kilometers) up into Earth's atmosphere using a high-altitude balloon. While the gentle ride won't earn passengers their astronaut wings — outer space is generally considered to begin at an altitude of 62 miles (100 km) — it will afford spectacular views of the blackness of space and the curvature of our planet, World View officials say.

"Seeing the Earth hanging in the ink-black void of space will help people realize our connection to our home planet and to the universe around us, and will surely offer a transformative experience to our customers," World View CEO Jane Poynter said in a statement.

"It is also our goal to open up a whole new realm for exercising human curiosity, scientific research and education," she added. "We look forward to pioneering this new, accessible and affordable spaceflight regime, and to sharing the breathtaking, once-in-a-lifetime experience with people from around the globe."

World View's balloon ride, which will let customers glide for about two hours at maximum altitude, is a departure from the other options available to would-be space tourists at the moment.

For example, Virgin Galactic and XCOR Aerospace are both offering brief suborbital flights to an altitude of about 62 miles aboard rocket-powered space planes. In both cases, passengers will get a few minutes of weightlessness along with the great view.

Virgin Galactic is charging $250,000 per seat aboard its six-passenger SpaceShipTwo, while a ride on XCOR's one-passenger Lynx vehicle costs $95,000. Neither spaceship is fully operational at the moment, though both could be flying customers in the next year or so, officials with each company have said.

Passengers on World View balloon flights will ride inside a capsule designed by Paragon Space Development Corp., which is also aiding two private Mars efforts — the Inspiration Mars mission to send two astronauts on a Red Planet flyby in 2018 and Mars One, a project that aims to land four people on the Red Planet in 2023 as the vanguard of a permanent colony.

The Federal Aviation Administration recently concluded that World View's spacecraft and operations fall under the jurisdiction of the office of Commercial Space Flight, company officials said.

Email ThisBlogThis!Share to TwitterShare to FacebookShare to Pinterest
Labels: space