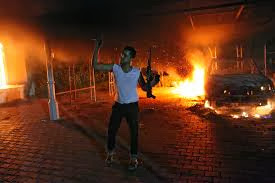 Morgan Jones is a former British soldier who was a security officer in Benghazi.


He witnessed the attack on the barely protected U.S. outpost on September 11, 2012 and has provided 60 Minutes with details about what happened that night.

The 60 Minutes report is devastating.  It is more clear than ever that the Obama administration ignored several warnings about the inevitability of an attack:

Not only did the Obama administration ignore warnings about an impending attack, they lied about it afterward, blaming the attack on an internet vide - See more at:

Email ThisBlogThis!Share to TwitterShare to FacebookShare to Pinterest
Labels: Benghazi