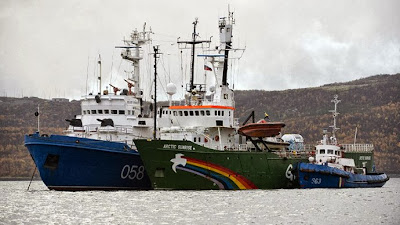 Russia’s Foreign Ministry has lashed out at the Netherlands for its failure to curb the activity of the Dutch-flagged 'Arctic Sunrise' Greenpeace vessel, following Amsterdam’s announcement that it’s taking legal action against Moscow.


On Friday, the Netherlands’ signaled it was taking Russia to an international maritime dispute court to challenge the legality of “Arctic Sunrise” seizure by Russia’s law enforcers. The Dutch Foreign Minister Frans Timmermans also said that he would use his diplomatic channels to try and get the 30 detained Greenpeace activists free.

Moscow slammed the Netherlands for not having intervened in the situation earlier.


“Over the last year and a half the Russian side made repeated attempts to contact their Dutch counterparts to intervene in the vessel’s illegal activities”, Russian Foreign Ministry deputy head Aleksey Meshkov told RIA Novosti on Saturday. “Unfortunately, this was not done. Therefore we have significantly more questions for the Dutch side than they can have for us.”

More than 1,500 people marched to the Russian embassy in Helsinki, Finland on Saturday to rally in support of the arrested Greenpeace activists, which include a Finnish citizen. From the beginning, the organizers made it clear they would not tolerate Anti-Russian slogans, said one of the protesters as cited by Gazeta.ru adding that the rally is aimed against the illegality of Gazprom’s activity in the Arctic.
>read more>>

Email ThisBlogThis!Share to TwitterShare to FacebookShare to Pinterest
Labels: Greenpace