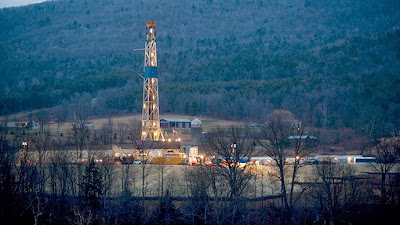 Researchers have found high levels of radioactivity, salts, and metals in water and sediment located downstream from a treatment facility which processes fracking waste-water from oil and gas production sites in Pennsylvania’s Marcellus shale formation.

Radium is a radioactive metal that can cause diseases like leukemia and other ill-health effects if one is exposed to large amounts over time.


The treatment facility processes flowback water - highly saline and radioactive wastewater that resurfaces from underground after being injected into rocks in the fracking, or hydraulic fracturing, process.

Fracking is the extraction of oil and gas by injecting water to break rock formations deep underground. Use of the process has increased rapidly in the US in recent years, yet scientists who have studied the practice warn of climate-damaging methane emissions and radioactive effects that come with it.

The study was published Wednesday in the Environmental Science and Technology journal. It focuses on two years of tests on wastewater flowing through Blacklick Creek from oil and gas production sites in western Pennsylvania’s Marcellus shale formation.
>read more>>