Who ordered to attack Russian diplomat in the Netherlands? 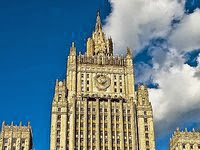 Last weekend, a minister counselor of the Russian Embassy in the Netherlands was attacked by unknown people in camouflage uniforms.

According to the Russian Foreign Ministry's spokesman Alexander Lukashevich, the Russian diplomat was beaten, handcuffed and detained for several hours at a police station. The Russian President called the incident with Dmitry Borodin a flagrant violation of the Vienna Convention and asked the Dutch side for explanations in connection with the beating of the Russian diplomat.

The Dutch Ambassador in Moscow Ron van Dartel was summoned to the Foreign Ministry of the Russian Federation and given a harsh note in connection with the incident.

On Sunday night gunmen in police uniform who did not show any documents or badges confirming that they were police officers have stormed the apartment of a minister counselor at the Russian Embassy in The Hague Dmitry Borodin who has diplomatic immunity. They reported that the neighbors allegedly sent a report about child abuse that took place in the apartment. Although Borodin told the intruders about his diplomatic status, they knocked him to the floor in front of his children, handcuffed him and hit him on the head with a baton.

Borodin wrote in his microblog on Twitter that men in uniform handcuffed him and took him along with his children to the station where they spent three hours. He was rescued by a diplomat of the Russian Embassy. There was no apology or explanation from the Dutch.

Dmitry Borodin was born in 1967. He has a diplomatic rank of counselor of the first class. After graduating from Moscow State Institute, Borodin worked in the embassy of Soviet Union and later Russia, in Zaire, Benin, Luxembourg, Belgium, and the Foreign Ministry in central Russia. In 1995 he took part in the peacekeeping mission in the former Yugoslavia. Dmitry Borodin is married and has two children - a two-year old son and four year old daughter.

"According to the norms of the diplomatic law immunity applies to diplomats or counselor officers unless they attack the police first. Even in situations with ordinary citizens force cannot be applied if there is no resistance. In this situation there is a clear and grave violation of any and all legal norms and diplomatic law," said Deputy Secretary of the Public Chamber of the Russian Federation, Vice President of the Russian Union of Lawyers Vladislav Grib. "This is a flagrant violation of the Vienna Convention. Russia must react very harshly."

You do not have to be a lawyer or international law expert to understand that if a diplomat is taken to a police station, it means that this is not an accident. Who and why is playing dirty games? There were assumptions that Greenpeace has something to do with it, avenging for their detained fellows, most of whom are foreigners.

Lead researcher of the Institute of Europe of the Russian Academy of Sciences, Center for Social Studies and Political Science Sergei Fedorov in an interview with Pravda.Ru said the following: "In this situation there is a flagrant violation of all norms of international law. Another question is what motivated it, what the causes of the incident are, and who gave the order. It will probably become clear in the course of the investigation and explanation of the Dutch side that should follow whether this was a conscious provocation or simply a misunderstanding. It is odd that the incident occurred in the Netherlands, one of the mainstays of European democracy, a country that is in good standing. Revenge for Greenpeace was to follow against similar organizations, and not the diplomatic staff. This is an alpha and omega of international communication."

The Netherlands embassy in Moscow did not comment on the incident with the Russian diplomat Dmitry Borodin. Our colleague in the Netherlands Anna Kuznetsova looked at the reviews and comments of the Dutch on the Internet.

"Despite the variety of opinions, most users find the incident with the Russian diplomat and the reasons behind it murky," the journalist told Pravda.Ru. "This is a very murky story. Some bloggers have drawn parallels with the Greenpeace vessel. Perhaps this is a provocation. However, only on the basis of complaints from neighbors police in the Netherlands cannot storm an apartment, beat up a man in front of his children and take him to jail. This is nonsense."

Update: Netherlands Foreign minister Frans Timmermans made an apology but with reservations. "The police did nothing wrong".