Generals In Charge of America’s Nuclear Arsenal Relieved Of Command 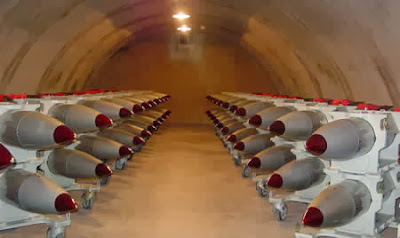 The Associated Press reports that there has been a shake up in the top echelons of U.S. military leadership.


Two-star Maj. Gen. Michael Carey is to be relieved of his command over the 20th Air Force. The unit is responsible for the Air Force’s entire nuclear arsenal.

The decision was made by Lt. Gen. James Kowalski, commander of Air Force Global Strike Command. Kowalski is in charge of all Air Force nuclear weapons, including bombers.


An internal email obtained by the AP on Friday said the allegations against Carey stem from an inspector general probe of his behavior while on an unspecified “temporary duty assignment.” The email said the allegations are not related to the operational readiness of the ICBM force or recent failed inspections of ICBM units.

Last month it was reported that numerous nuclear war heads had been secretly re-positioned without a paper trail to unknown destinations somewhere inside of the domestic United States.

It is not clear whether the termination of Major General Carey is related to this event, or if the official reason of misbehavior is, in fact, true.

Two of the top nuclear commanders within the United States have now been terminated following the exclusive high level military leak report by Alex Jones and myself regarding the secret and unsigned nuclear weapons transfer from Dyess Air Force base to South Carolina. Disturbingly, the high level suspensions from top generals within the military establishment are not the only red flags to follow the leaked report.

Even before it was announced that the second highest nuke commander in the United States was suspended on the same day of the secret nuke transfer just weeks later, it was Senator Lindsey Graham who went on record hours after our report in saying that a ‘nuclear attack’ could come to South Carolina in the event that we did not move militarily against Syria and Iran — pushing even harder to action against both Iran and Syria.

This alone generated hundreds of thousands to view our video reports and millions to examine our reports, which had immediately gone from concerning high level military intelligence to an international topic.

But now, even after we had Lindsey Graham warn against a nuclear strike in the exact region we told you the nuclear warheads were being transfered without a paper trail, we have the absolute highest level military nuke commanders being removed.

“Kunze said Strategic Command did not announce the Sept. 3 suspension because Giardina remains under investigation and action on Kehler’s recommendation that Giardina be reassigned is pending. The suspension was first reported by the Omaha World-Herald.”

It is also revealed in the mainstream media reports that the government did not want these suspensions and firings to go on record, and that it was an anonymous government insider who provided leaked emails to the Associated Press:

“An internal email obtained by the AP on Friday said the allegations against Carey stem from an inspector general probe of his behavior while on an unspecified ‘temporary duty assignment.’ The email said the allegations are not related to the operational readiness of the ICBM force or recent failed inspections of ICBM units.”

What this means is that the nuke commanders were terminated behind the scenes in a move that was not meant to hit the public eye — especially not the fact that the second in command was fired on the same day of the leaked nuclear transfer. More importantly, shedding light on the secret transfer of nuclear weapons and the numerous red flags that prove its validity is key in stopping the psychopathic control freaks in government from going through with Graham’s ‘warnings’ of a nuclear explosion that would lead to a war with Syria.

The highest level generals have now installed a new commander, Pentagon Air Force Commander Jack Weinstein, who may be willing to do the bidding of higher ups that the previous two nuke commanders would not.

Email ThisBlogThis!Share to TwitterShare to FacebookShare to Pinterest
Labels: nuclear, US