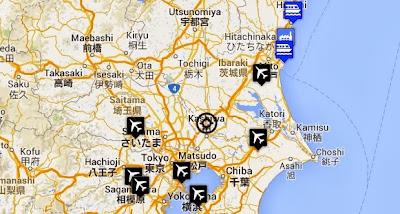 Children tested positive on radioactive cesium... This is the stuff that kills people. The real deal. It's happening now.

This is a school 50 kilometers northeast of Tokyo, in a city called Moriya. A local citizens' group recently carried out examinations on 85 children under the age of 18 and found out that 58 of them, or 70 percent had radioactive cesium in their urine samples.

The kind of cesium detected is a fission product formed in nuclear power plants. Members of the group say there's a high chance the cesium entered the children's bodies after eating food contaminated with radioactive material. While the nuclear concerns spread throughout Japan, the Tokyo Electric Power Company is trying to contain radioactive leaks at the crippled
Fukushima Nuclear Power Plant.

TEPCO said Thursday that another tank at the plant is leaking radioactive water into the Pacific Ocean. This is a different tank from the one that was found to have been leaking 300 tons of contaminated water back in August. TEPCO said that workers detected water dripping from the top of an overflowing tank,.. and estimated that about 430 liters had leaked into the sea via a ditch next to the concrete barrier.

Japan is dangerously contaminated by radioactivity over a  far larger area than previously reported by TEPCO and the central government according to new reports from multiple sources. The prefectural government of Iwate released new data that shows  radioactive contamination of grass exceeds safety standards at a distance of 90 to 125 miles from the damaged Fukushima nuclear power plants.

The prefectural government found on Tuesday radioactive cesium exceeding the limit of 300 becquerels per kilogram in grass collected from pastures in four areas, including Tono and Otsuchi. The areas are located about 150 to 200 kilometers north of the Fukushima nuclear power plant.

Science Magazine reports that Japanese scientists have become so concerned about the health of their children that they have initiated their own radiation monitoring program and made their own maps. The results are shocking. 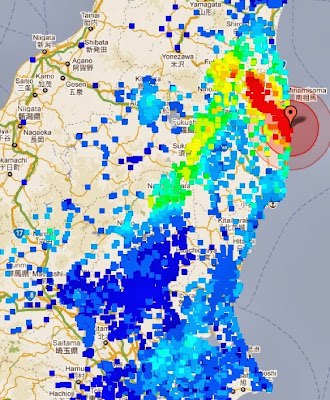 Parents in Tokyo's Koto Ward enlisted the help of Tomoya Yamauchi, a radiation physicist at Kobe University, to measure radiation in their neighborhood. Local government officials later joined the act, ordering radiation checks of schoolyards and other public places and posting the results on their Web sites. An anonymous volunteer recently plotted the available 6300 data points on a map. And Yukio Hayakawa, a volcanologist at Gunma University, turned that plot into a radiation contour map.

It shows one wide belt of radiation reaching 225 kilometers south from the stricken reactors to Tokyo and another extending to the southwest. Within those belts are localized hot spots, including an oval that encloses northeast Tokyo and Kashiwa and neighboring cities in Chiba Prefecture.

Radiation in this zone is 0.4 microsieverts per hour, or about 3.5 millisieverts per year. That is a fraction of the radiation found throughout much of Fukushima Prefecture, which surrounds the nuclear power plant. But it is still 10 times background levels and even above the 1-millisievert-per-year limit for ordinary citizens set by Japanese law. The health effects of such low doses are not clear and are passionately debated. But it is known that children are more susceptible to radiation than adults, and few parents want to take chances with a child's health. Besides, “The law should be observed,” Yamauchi says. Kyo Kageura, an information scientist at the University of Tokyo, says there should be a public discussion of the issue, “based on a scrupulous presentation of the data, including to what extent the 1-millisievert limit can be achieved.”

A map of citizen measured radiation levels shows radioactivity is distributed in a complex pattern reflecting the mountainous terrain and the shifting winds across a broad area of Japan north of Tokyo which is in the center of the of bottom of the map.