Is Fukushima tainting one of Alaska's most valuable resources?


One of the containment tanks sprang a leak and was spilling tons of hazardous waste water onto the surrounding area, about a football field’s length from the Pacific Ocean.

Now, Japanese officials said, the situation is too big. They need international assistance.

There is speculation the tanks have been leaking, little by little, continuously since the earthquake and subsequent tsunami more than two years ago. It’s never been 100 percent confirmed; many said evidence is as yet inconclusive.

While researching for this piece, we stumbled upon a graphic taken by the National Oceanic and Atmospheric Administration in July of 2011. It was a radioactive seawater impact map showing Japan and the adjacent waters of the Pacific. The spread of nuclear waste materials can be seen extending from the Fukushima site westward into the Pacific like a forest fire plume lying on its side. A second map was generated by NOAA nearly a year later showing the plume had expanded by nearly twice its original size.

We are concerned this hazardous material is hitching a ride on marine life and making its way to Alaska.

Currents of the world’s oceans are complex. But, generally speaking, two surface currents — one from the south, called the Kuroshio, and one from the north, called the Oyashio — meet just off the coast of Japan at about 40 degrees north latitude. The currents merge to form the North Pacific current and surge eastward. Fukushima lies at 37 degrees north latitude. Thousands of miles later, the currents hit an upwelling just off the western coast of the United States and split. One, the Alaska current, turns north up the coast toward British Columbia and Southeast Alaska. The other, the California current, turns south and heads down the western seaboard of the U.S.

The migration patterns of Pacific salmon should also be taken into consideration. In a nutshell, our salmon ride the Alaska current and follow its curve past Sitka, Yakutat, Kodiak and the Aleutian Islands. Most often, it’s the chinook, coho and sockeye salmon migration patterns that range farthest. Chum and pink salmon seem to stay closer to home. Regardless of how far out each salmon species ventures into the Pacific, each fish hitches a ride back to its home rivers and spawning grounds on the North Pacific current, the same one pulling the nuclear waste eastward.

We all know too much exposure to nuclear waste can cause cancer. And many understand that certain chemicals, such as cesium-137 and strontium-9, contained in said waste products can accumulate in fish by being deposited in bones and muscle permanently.

We are concerned our Alaska salmon are being slowly tainted with nuclear waste. We are worried about the impact this waste could have on our resources, and especially the people who consume them.

And we are not alone. Other scientists, such as Dr. Ken Buesseler, a senior scientist at the Woods Hole Oceanographic Institution in Massachusetts and a world expert in marine radioactivity, are taking a closer look at impacts of Fukushima on fish. His team has tracked radioactive material up to 400 miles off Japan’s coastline. The amount they’ve found so far does not pose a risk to humans or marine life, they’ve said.

That’s good news. But that’s what scientists said about Chernobyl before later finding they had gravely underestimated its negative effects.

What does concern Buesseler, who wrote on this for CNN recently, is that levels coming from the damaged nuclear plant are not decreasing. Instead, they are increasing. In that piece, he urged world leaders to come together to ensure a solid plan of action to resolve this problem.

We urge scientists in Alaska to be proactive about conducting research and monitoring our salmon species. And we urge them to be vocal about their findings. Let’s be 100 percent sure our Alaska salmon are safe to eat. Once we know for certain, it will only strengthen the importance and high regard of this valuable resource. 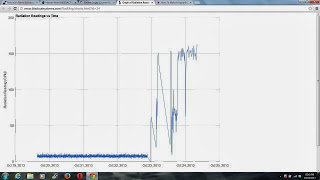 Hawaii went radioactive yesterday with spiking radiation readings as shown in both of the two charts below from BlackCatSystems showing huge spikes in radiation levels. With reports of the Pacific Ocean dying and radiation levels rising throughout much of the West coast according to this scariest chart , is this Fukushima making its impact here in America? According to the alarming video below, Fukushima is now in fuel rod meltdown after heavy rains and a power blackout that we have not been made aware of by the mainstream media.

“After the heavy rains and power blackout (Which Tepco forgot to mention). Since then a dramatic rise in radiation levels is being reported and a few Tepco workers have spilled the beans on what is really happening.”

There has been a lot of Hawaii concern about radioactivity of marine debris from Japan’s March 2011 Fukushima nuclear plant meltdown, but the first actual physical impacts of the disaster have likely come from the sky.

The short version: Radiation in Hawai`i and the western states increased dramatically following  Fukushima, and shortly afterward, children born in these states displayed a statistically significant increase--16 percent-- in the rate of hypothyroidism, a disease that is associated with radiation.

Very soon after the radiation release, the radioactive particles were on their way across the Pacific on the winds, and very soon after that, newborns in Hawai`i and the western Mainland states began displaying possibly radiation-related thyroid disease.

The video below is from yet another geographical area, Canada updates on the Fukushima radiation damage, with a synopsis.

Maybe nothing can be done about the global devastation that will affect nearly every man woman and child in the world, in some way or another. Whether it is a family member or friend getting sick, or someone they know or love affected by the sea life damage, or the ecosystem damage as we have already seen that starfish are turning to goo, everything is connected somehow in nature and whether something can be done or not, isn’t the point.

Our health, our economy, our food and so much more will continue to be affected for decades.

No one is highlighting it more than a story here, a story there, without looking at the big picture.

People across the world have the right know all the facts, whether it can be fixed or not and governments are downplaying those facts and the media is complicit by following along like good little puppies.


Experiment to Raise Salmons in Floodplains a Success

Scientists have discovered a new method of increasing the numbers of the long threatened salmons- raising them in flooded rice fields.

A team of researchers at the University of California, Davis, through an experiment managed to increase the population of the small Chinook salmon. They introduced Chinook salmons into the flooded rice fields of Northern California, and successfully managed to recover the fattest, fastest growing salmon on record in the state's rivers.

The main aim of the experiment was to determine whether the fields that are flooded between the harvests, could act  as a substitute for the current depleted wetlands that served as nurseries  for juvenile salmon, reports Associated Press.

The report submitted to the U.S. Bureau of Reclamation describes the three concurrent studies conducted by UC researchers along with the California Department of Water Resources. The experiment was conducted in the floodplain of Yolo Bypass, which diverts floodwaters from Sacramento River. Yolo Bypass is the Central Valley's largest contiguous floodplain that offers critical fish and wildlife habitat. Agriculture is a main land use in the bypass, and rice is the primary crop.

"We're finding that land managers and regulatory agencies can use these agricultural fields to mimic natural processes," co-author Carson Jeffres, field and laboratory director of the Center for Watershed Sciences at UC Davis, said in a statement. "We still have some things to learn, but this report is a big step in understanding that."

They conducted tests on three rice field types: stubble, plowed and fallow. The researchers noticed that the fish did not prefer any of the three fields. Due to the high supply of food, the salmon growth rate boomed across habitats. But they preferred the habitat that had better water flow.

"It's like a dehydrated food web," said Jeffres of the harvested rice fields. "Just add water. All of those habitats are very productive for fish."

The fish reared in plowed rice fields grew faster than those reared in stubble or weedy vegetation.
"These results are good news for the effort to rebuild salmon populations in California," said lead author Jacob Katz, a biologist with California Trout. "We've always suspected that when we mimic natural flood processes in agricultural fields, we give these fish a food-rich habitat they recognize and thrive in. These findings support that theory and provide a strong path forward for California land-use planners, conservationists and farmers alike. This is a win-win model that can be replicated around the state."