Who will protect you from the police? 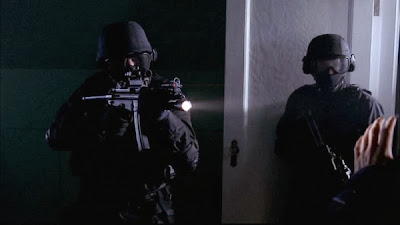 The rise of militarized home invasions


Increasingly, police departments around the country are becoming more militarized than at any time since the development of the modern American law enforcement apparatus, and it's having a disturbing result: the number of Americans being killed in their own homes, without ever having committed a crime, is rising.

The disturbing trend was laid bare once again in a column by Rutherford Institute founder John W. Whitehead, who writes on such topics frequently. In the column, Whitehead provides a number of examples of recent incidents where groups of heavily armed combat cops had burst into the wrong places and killed homeowners:

Unfortunately, with every passing week, we are hearing more and more horror stories in which homeowners are injured or killed simply because they mistook a SWAT team raid by police for a home invasion by criminals. Never mind that the unsuspecting homeowner, woken from sleep by the sounds of a violent entry, has no way of distinguishing between a home invasion by a criminal as opposed to a government agent. Too often, the destruction of life and property wrought by the police is no less horrifying than that carried out by criminal invaders.


Whitehead provides a number of recent examples in his piece:

-- One night, a SWAT team kicked in the door of ex-Marine Jose Guerena's home during a drug raid and opened fire. In thinking his home was being invaded by armed criminals, Guerena grabbed a gun and waited in the hallway to confront the intruders after telling his wife and child to hide in a closet. But he never fired once; indeed, his gun was still on safety when he was killed in a hail of bullets fired by the SWAT officers, who fired 70 rounds at him, striking him 23 times. In the end, Guerena, with no prior criminal record mind you, was killed for nothing, as cops found nothing illegal in his home.

-- Aiyana Jones, seven, was sleeping soundly on a sofa in her living room, which was positioned underneath a window. Suddenly, the night's serenity was punctured by a flash grenade tossed through the living room window, which was followed by the sound of police crashing into the apartment and a weapon being fired. Charles, Aiyana's father, rushed into the room, only to be tackled by cops and forced to lie, face down, in a pool of his daughter's blood. It was only hours later that he was told his daughter had been killed. Cops were looking for a 34-year-old suspect who was found later - but not in Aiyana's apartment.

-- A police team used a battering ram to bust through the door of 92-year-old Kathryn Johnson, mistaking her home for a drug den. Afraid that burglars were entering her home, which was indeed in a dangerous neighborhood, she fired a warning shot when the door burst open. Cops fired back, killing her with six bullets.

-- The apartment complex in which Eugene Mallory, 80, lived was raided by deputies with the Los Angeles Sheriff's Department after they claimed to have smelled chemicals related to the making of meth. Again, thinking his home was also being raided by criminals, Mallory allegedly raised a gun at the "intruder" cops, who then shot him six times, killing him as well. Incredibly, an arrogant spokesman for the sheriff's department claimed after the tragedy, "The lesson here is don't pull a gun on a deputy." Nice.

There are several other examples in Whitehead's column (found here), but you get the picture. As a nation, this is fast becoming a big problem, and it is only likely to get worse.

When did the American people ask for their local police departments to be transformed into paramilitary forces, complete with automatic weapons, body armor and military vehicles? Is it part of the "war on terror" mentality?

When did "raiding" become preferable to gathering intelligence, verifying addresses and suspects, showing up with street cops and a detective (and a warrant), covering all entrances and then knocking on the door?

When the American Civil Liberties Union devotes an entire section to the militarization of police forces around the country, you know the problem's gotten out of hand.

Related:
Veterans are the last line of defense against tyranny
Police set up roadblocks to 'voluntarily' collect DNA, blood samples from innocent Americans