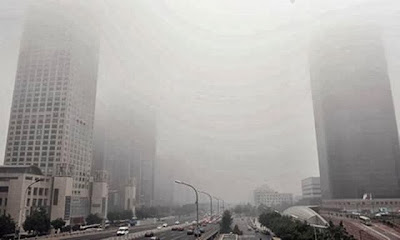 
There are many theories on how China could best tackle its air pollution problem: it could shutter its factories, upgrade its emissions standards or, according to one Dutch artist, it could simply suck up the haze using a giant electromagnetic vacuum cleaner.


At least, Daan Roosegaarde says, it doesn't hurt to dream. With Beijing in mind, Roosegaarde has designed a system called Smog that can pull pollutants from the sky. Copper coils buried underground attract airborne particles by generating an electrostatic field, "like a balloon that attracts your hair", he explains. The particles can then be collected and repurposed. An animated promotional video [see below] shows the smoggy sky above a park parting like the Red Sea, the blue sky visible through a perfectly round gap in the haze.

"We always had this notion of merging nature with technology," says Roosegaarde, who owns studios in the Netherlands and Shanghai. "It's hacking the landscape, in a poetic way."

Over the past week, a noxious cloud of smog has blanketed a broad swath of the the country's north-east. In the city of Harbin, levels of PM2.5 – particulate matter small enough to lodge itself deep within the lungs – soared to 1,000 micrograms per cubic metre, worse than Beijing's historic highs. Visibility dropped to 20 metres and authorities grounded flights and closed more than 2,000 schools.

Air pollution has been a huge source of public outrage since last winter when Beijing was hit by a week of smog so noxious that central government had no choice but to respond. Environmental authorities, once reticent to even discuss the issue for fear that it could stoke social unrest, have begun seeking a dash of inspiration to buoy their long-haul anti-pollution measures. They have lent support to a bevy of innovative small-scale ideas.

Roosegarde, already known for developing ambitious projects such as an internet-connected "smart highway" in the UK, conceived of the Smog system during a business trip to Beijing, as he watched the CCTV tower gradually disappear into a white-grey haze from his hotel window.

The artist recently forged an agreement with Beijing's mayor to test the project in one of the city's public parks, having already run successful trials in a 25sq metre room. He says the project should be ready for launch within nine months. "Right now it's just a question of getting funding for the pilot."

Email ThisBlogThis!Share to TwitterShare to FacebookShare to Pinterest
Labels: pollution