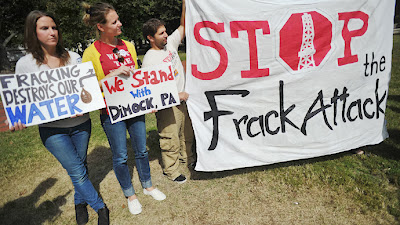 Thousands of people worldwide are expected to join the Global Frackdown protest on October 19. ‘Fracktivists’ from over 26 countries will gather to demand an end to fracking and “dangerous” shale gas drillings.


Numerous events are scheduled to take place mainly across the US and Europe with some rallies already having kicked off in the UK, Romania, France and Spain.

The global movement will be also joined by activists from Australia, New Zealand, Africa, and Indonesia. So far, a total 26 countries are listed to be taking part in the protest.

Fracking, or hydraulic fracturing, is the extraction of oil and gas by injecting chemicals & water to break rock formations deep underground.

Fracking a single well can require between two and nine million gallons of water combined with sand and chemicals. Much of the used water returns to the earth’s surface, but contains radium and bromides - cancer-causing, radioactive substances. The toxic chemicals can then float into lakes and rivers or contaminate the ground.

On Saturday, Fracktivists in all participating countries will call on elected officials to open their eyes to the consequences of fracking, which they say is a risky technique. They will demand action to protect the public.

“It is critical that our elected officials hear the truth from their constituents,” the organizers said.