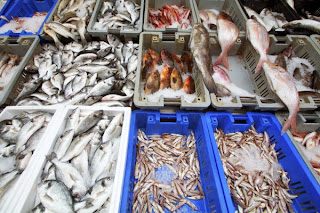 Two and a half years after  Fukushima, many fish species have highly elevated amounts of radioactive cesium from the stricken plant, including species that Japan exports to Canada, according to the Japanese Fisheries Agency’s tests on fish catches.


And Japanese fish and seafood exports to Canada have grown significantly since Fukushima, with $24 million in exports in 2012, up 20 percent from $20 million in 2010, according to Statistics Canada data.


And in February, a greenling in the harbour of the Fukushima plant had a record 740,000 becquerels per kilo of cesium—7,400 times Japan’s ceiling. Two in five fish tested in July had detectable levels of cesium 134 or cesium 137, radioactive isotopes released from Fukushima.

Fish caught far out in the Pacific had an average of two becquerels of cesium per kilo.

The Straight used these levels to determine how much radiation the public has been exposed to in Japan and elsewhere, based on fishery data from the United Nations’ Food and Agriculture Organization.

The average radiation levels are below Japan’s ceiling and Health Canada’s much higher ceiling of 1,000 becquerels per kilo for cesium and iodine 131.

But the radiation detected can still cause cancer, according to the U.S. Environmental Protection Agency’s cancer-risk formula, a leading international standard for forecasting cancer risks from radiation.

What’s more, the EPA formula underestimates cancer impacts because it doesn’t fully include all research on radiation impacts, in the estimate of Daniel Hirsch, a UC Santa Cruz nuclear expert.

(Also according to Hirsch, Health Canada uses a less accepted cancer-risk formula that underestimates the dangers even more.)

Hirsch helped preside over a study of nuclear-power workers in the 1990s that found cancer rates at least six to eight times higher than predicted by official formulas.


The radiation level at Japanese nuclear power plant Fukushima-1 reached the highest point after the accident in March 2011. The reason for such a significant rise in radiation was the error made by engineers involved in the liquidation of the aftermath of the tragedy.

The engineers erroneously disconnected the pipe, on which radioactive water was flowing from the reactor. As a result, almost 10 tons of liquid with a high content of cesium and strontium-90 found itself in the ocean. Six people suffered from serious radiation exposure.


Harvey Wasserman is a journalist, author, activist and historian Here he explains the critical situation at Fukushima and how the fallout, potentially 13,000 times more than Hiroshima, from and accident at fuel pool four could cover the globe.

A substantial number of Japanese have suddenly begun suffering nosebleeds that some reports indicate are likely tied to radiation poisoning from the damaged nuclear plants at Fukushima.

The reports are based on a series of tweets, allegedly from Japanese citizens who report the nosebleeds, along with photos of blood-soaked rags and bandages. Many of the reports are flowing through Facebook.

If true, the damaged Fukushima plant continues to wreak havoc

One site says that Japanese doctors who have been treating those afflicted by the massive radiation released when the plant was damaged by a major earthquake-caused tsunami on March 11, 2011, know that their patients have radiation sickness, but they are being prevented from discussing it publicly.
>read more>>