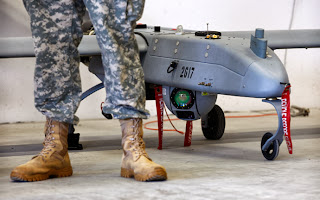 When Snowden’s leaks were first revealed, German Chancellor Angela Merkel claimed that she learned of the US surveillance programs through press reports.


It came to light that Germany’s BND intelligence service sends “massive amounts” of intercepts to the US and UK daily. Such revelations sparked a wave of protests across Germany calling on the government to provide more privacy and stop US spying activities.

As two new US ‘Hunter’ drones are set to start traversing German airspace next Monday, the army remains firm that they will be used solely for training drone operators rather than spying purposes, and will not be carrying weapons.
The Unmanned Aerial System (UAS) facility was officially opened at Vilseck Army Airfield on Monday by 7th Army Joint Multinational Training Command (JMTC). A letter of agreement between US and German authorities allows them the use of two ‘air bridges’ in the east of the country to train operators, it will be the first time a US unmanned aerial vehicle will fly beyond the limits of military training areas.

Hunter MQ-5B systems will span the distance between Hohenfels and Grafenwoehr, in the south east of the country, about 100km east from Nuremberg. Hohenfels is approximately 100km further south from Grafenwoehr.

The project has sparked concern after news began to leak out this summer. The US army has been channeling its efforts into gaining approval for the mission since 2007. “Some reports came out before we even knew we had approval,” Brig. Gen. Walter E. Piatt, JMTC Commander told Stars and Stripes.

Local communities have expressed apprehension about US drones being in German airspace. Germans are concerned about potential violation of their freedoms after the drones come into operation.  The recent scandal surrounding NSA spying activities in Germany and the protests that followed, has heightened public skepticism.

“It’s a big issue here in general, and it’s a very German topic,” Constanze Schulze, a reporter for ARD Bavaria stated. “There are many discussions going on about unmanned units, and of course there is some concern. I think that’s why you see so many reporters here [in Vilseck]. Everyone is talking about it.”

Politicians have also expressed concerns. Reinhold Strobl of the Social Democratic Party of Germany (SDP) said that the public was informed “too late” and that there was “inadequate” information provided by the German authorities and US military ahead of the deployment. If it was not for test flights conducted in July, the politician says, Germans would have been left completely in the dark.

Other politicians complained about the noise, saying that drones that reach 175kph“have the volume of a lawn mower,”according to Peter Braun, the mayor of Schmidmühlen.

Richard Reisinger from the Christian Social Union Party (CSU) also said that the way the public was informed about the issue lacked transparency. “What happens to the collected data?” he asks, expressing concern of potential risk of information misuse that would violate privacy.
>read more>>