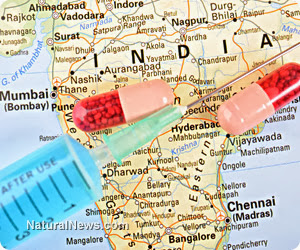 The second largest country in the world, India, has become a hotbed of pharmaceutical fraud, as unscrupulous drug companies, mostly from the West, continue to use India's generally poorer populations as human guinea pigs in unethical and flat-out inhumane clinical trials.


And India's Supreme Court is finally taking action against this massive organized crime ring by ordering India's health ministry to justify its approval of 162 global clinical trials to take place in the country.


Because it is a rapidly developing nation with lax regulatory protocols, India has been a primary target of the pharmaceutical cartel in its never-ending quest to dominate the medical systems of the world. Major drug companies have been largely successful in swindling the Indian government to approve trials for all sorts of "new chemical entities" (NCEs), many of which have been tested on rural Indians in poorer communities, where there is minimal access to proper medical care.

The situation has apparently gotten so out of control in India that several human rights advocacy groups have taken to the legal system for a remedy, filing a petition back in February pressuring government officials to take action. India's Supreme Court listened and, following a recent hearing, agreed to give the government an ultimatum that forces it to provide evidence backing the science behind its approval of these trials. The health ministry reportedly has just two weeks to comply with this order.

"Clinical trials of NCEs are being conducted without following proper protocol, and companies are taking advantage of poor people," says Amulya Nidhi, coordinator of Health Right Forum, a non-profit campaign seeking to end illegal and unethical drug trials in India.

The organization's website adds that an increasingly large number of clinical trials are taking place in the country with little oversight, which poses extreme risks for public health. This is evidenced by the fact that more than 1,500 Indian people died during clinical trials that took place just between the years of 2010 and 2012. And many more will follow them into their early graves, that is unless the government steps in now and stops multinational drug companies from preying on the less fortunate for massive financial gain.

"Trials of NCEs have fired controversy in India because of the high number of deaths that have occurred in the last few years," writes Dinsa Sachan for Chemistry World. "According to information from the health ministry, 1,542 deaths were reported in clinical trials between 2010 and 2012."


Doctors, leaders speak out against pharmaceutical corruption in India

Speaking on behalf of the common people of his country, C.M. Gulhati, editor of India's Monthly Index of Medical Specialties, told reporters that testing of NCEs in India "does not help the country." On the contrary, it only helps multinational drug companies "cut costs and avoid payment of compensation," a brave public admission.

Chinu Srinivasan, from the non-profit organization Low Cost Standard Therapeutics, agrees. He told reporters that Phase II and Phase III clinical trials for NCEs, which are the only ones currently allowed to take place in India, are incongruent with his country's social and political structure. Like many others, Srinivasan recognizes that India's current regulatory framework is severely lacking, which facilitates widespread abuse of the system by morally bankrupt pharmaceutical companies.

"We are concerned about and committed to the interests of the people," adds Nidhi about the purpose of her organization's campaign, noting that she and many others could not care less if drug companies incur losses as a result of an improved regulatory structure that protects the people of her country from being used and abused by Big Pharma.


Related:
Vaccine Injured African Children Used as Lab Rats
Big Pharma Criminality no Longer a Conspiracy Theory: Bribery, Fraud, Price Fixing now a matter of public record
Prescription Drugs Kill Over 100,000 People Each Year, Are You Being Medicated Incorrectly?
The Vaccine Hoax Is Over
Society's insanity plea: the real cause behind global mass poisoning and the downfall of modern civilization
20 Signs That The Pharmaceutical Companies Are Running A 280 Billion Dollar Money Making Scam