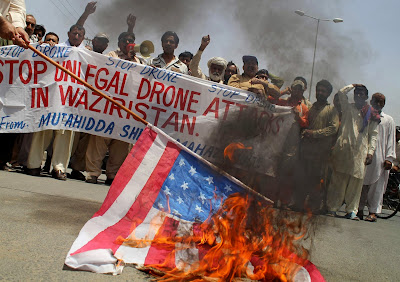 Last week, Amnesty International released a report on U.S. drone strikes in Pakistan, concluding that as many as 900 civilians might have been killed and 600 seriously injured in the attacks since 2004, when the controversial program began.


The United States launched between 330 to 374 drone strikes in Pakistan between 2004 and September 2013, according to the report. And those strikes have created a culture of fear on the ground.

"I wasn't scared of drones before," Nabeela, an 8-year-old whose grandmother, Mamana Bibi, was killed by a 2012 drone strike, says in the report. "But now when they fly overhead I wonder, 'Will I be next?'"

Nabeela is not alone.

A new documentary, "Wounds of Waziristan," reveals the story of drones as told by the people who live under them. [see below]

"There is an entire generation that has grown up under the eye of the drones," director Madiha Tahir said in a recent interview. "People tell me there are multiple drones that hover during the day, but they tend to usually strike at night. You never know when they are going to strike, and that has created an incredible amount of psychological stress."

And Tahir says many Pakistani civilians resent the United States for that reason. Of all the families she spoke to for the film, "There is not a single one that is for the drone attacks."

"There is no bigger terrorist than Obama or Bush," Karim Khan, whose brother and son were killed in a drone strike, says in the film. "Those who have weaponry like drones, who drop bombs on us while we are in our own homes, there are no greater terrorists than them."

The White House has downplayed the number of civilian deaths associated with drone strikes while playing up the number of militants killed. But those who live in Pakistan's tribal region say such figures are subterfuge.

"When an attack happens, the media claims to know how many militants were killed," Noor Behram, a Pakistani photojournalist, says in the film. "Actually, you only find body parts on the scene, so people can't tell how many have died."

The documentary, released online on Monday, comes a day before survivors of a 2012 drone strike in north Waziristan are scheduled to testify on Capitol Hill — marking the first time congressional lawmakers would hear directly from victims of drone strikes.