ECB’s Draghi: Knowing Too Much About Our Big Banks Could Set Off A Panic 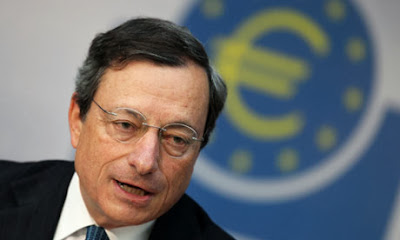 European banks, like all banks, have long been hermetically sealed black boxes.


If someone managed to pry open just one tiny corner, the reek of asset putrefaction that billowed out was so strong that the corner would immediately be resealed. In cases where the corner didn’t get resealed fast enough and too much of the reek spread, the whole bank collapsed, only to be bailed out by taxpayers, often in other countries; it’s easier that way.

The only thing known about the holes in the balance sheets of these black boxes, left behind by assets that have quietly decomposed, is that they’re deep. But no one knows how deep. And no one is allowed to know – not until Eurocrats decide who is going to pay for bailing out these banks. How do we know? ECB President Mario Draghi said that on Friday in Washington.

And today, the Eurogroup of 17 finance minister had a huddle in Luxembourg to try to decide that issue.

The IMF, which can only sniff around the surface of the banks, determined that the Spanish and Italian banks alone would have to recognize an additional €230 billion ($310 billion) in losses over the next two years. As we have seen time and again, bank losses are always much larger when the truth finally seeps out, and that doesn’t happen until after the bank collapses and someone from the outside counts what’s left over.

Additional, because these banks have already written off a mountain of bad assets. In both countries, banks have collapsed and been bailed out, some twice – in Spain at the expense of taxpayers in other Eurozone countries.

Next year will be a moment of truth, so to speak, when the ECB is to become the regulator of the 130 largest banks in its bailiwick. Imbued with new powers, it will subject them to a somewhat realistic evaluation, rather than the “stress tests” of yore that were nothing but banking agitprop – assuming certain banks in Italy and Spain can be kept upright until then.

A sense of urgency hung over the meeting today. Time was running out on those banks. But the European banking union, that instrument by which a collapsed bank could be unwound and restructured and its investors and depositors made whole by taxpayers in all Eurozone countries, or at least in the shrinking number of countries that by then haven’t already been bailed out – well, that noble precision instrument doesn’t exist yet! And that’s a problem for the planned bank examinations.

“The effectiveness of this exercise will depend on the availability of necessary arrangements for recapitalizing banks … including through the provision of a public backstop,” Mario Draghi explained on Friday to set the mood for today’s meetings. “These arrangements must be in place before we conclude our assessment.”

Meaning: The truth shall not be known until after the Eurocrats decided who would have to pay for the bailouts. And the bank examinations won’t be completed until then, because if any of it seeped out – Draghi forbid – the whole house of cards would collapse, with no taxpayers willing to pick up the tap as its magnificent size would finally be out in the open!

Get taxpayers committed while they’re in the dark – that’s the finely honed strategy. The Eurogroup of 17 finance ministers was meeting in Luxembourg to kick off that process. Hence the banking union. Not every politician in Europe, particularly in Germany, Finland, and the Netherlands, is gung-ho about the prospect of raising taxes on the people and tightening their belts in other ways, in order to bail out the banks in Italy and Spain. They’re saying that each country should pay for its own bailouts.

But unless there’s an agreement as to whose taxes will be jacked up and whose belts will be tightened in order to bail out the investors of those banks, the ECB will not complete examining the banks. It can’t afford to. Because the results without bailout plan would cause a panic.

“We have to find a solution now,” urged Michel Barnier, the EU Commissioner for Internal Market and Services, the entity that deals with financial regulation. “The next financial crisis is not going to wait for us.”

Despite the urgency of the banking crisis that can’t be kept on hold much longer, German Finance Minister Wolfgang Schäuble, without whom nothing can be worked out, was tangled up in Berlin in coalition negotiations to form a government in Germany. So Jeroen Dijsselbloem, president of the Eurogroup, had to admit after the meeting today that not much had been accomplished, and conceded, “We need to provide full clarity soon.”

But there may be potentially false a glimmer of hope for taxpayers. The bailout in February SNS Real, the fourth largest bank in the Netherlands, has shown that stockholders and junior debt holders can be asked to lose money (though holders of senior debt and covered bonds were made whole). And the bank “bail-ins” of the cesspools of corruption in Cyprus have shown that deposits beyond the limits of deposit insurance can be fair game as well. These increasingly fashionable high and tight haircuts lighten the load on taxpayers.

“Taxpayers should be protected and financial stability maintained,” explained Economy and Monetary Commissioner Olli Rehn. Bailouts would be the last resort if financial markets and national governments couldn’t come up with the necessary funds, he said. Which neither Italy nor Spain can. Hence the coming bailouts. Taxpayers in other countries, get ready! This is going to be ugly.

The US has abused its three phenomenal privileges – including the control of the only world currency – to put global financial stability at risk, “like a truck full of dynamite heading right toward us,” said the chairman of the International Advisory Board of the Universal Credit Rating Group. But a “new financial order” is forming. And there’s a timeframe. Read….Next Step In Dismantling The Dollar And US Credit Hegemony.