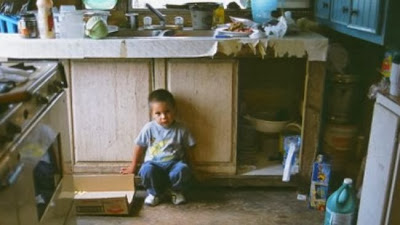 More than half of British children in poverty are living in cold, damp homes, a new survey has found.


The study of 2,000 10-17-year-olds by the Children’s Society charity revealed that 76 percent of British children are "often worried" about how much money the family had.

More than 53 percent said their home was too cold last winter and 24 percent said it was "much colder" than they would have liked.

One in four (about 26 percent) also said their home suffered from damp or mould.


The Children's Society said the results are a “wake up call” to authorities to figure out children’s fear and worries about living in poverty.

"For millions of children up and down the country, poverty is a grinding reality - and it is getting worse,” the charity's chief executive Matthew Reed said.

“Many families are facing stark and unacceptable choices, like heat or eat. This is disgraceful in any country,” he added.

Reports by the Department for Work and Pensions (DWP) revealed earlier that around 3.5 million children are currently growing up in relative poverty in Britain.

In 2011-12, 2.3 million or 17 percent of UK children were recorded as “living in homes with substantially lower than average income”.

The new figure, however, rises to 3.5 million or 27 percent when housing costs are deducted from incomes.

Children’s campaigners say the figure is much higher and that 300,000 more children live in poverty compared to previous year.

A separate survey published on Tuesday by another charity, 4Children, shows that an increasing number of families are using the services offered by children’s centers, despite the fact that many are being starved of cash due to local government funding cuts.

Their research reveals that over the past 12 months, 66% of centers are operating on a decreased budget, but 73% are dealing with an increased number of families. A third say that they expect to be offering a reduced number of services within a year.

According to the study, over a million families used the services of children’s centers and they are supporting two-thirds of disadvantaged families with children under the age of five.

“The past twelve months have seen existing pressure on families mounting, with increasing strain on job security, household finances, relationships and widespread anxiety. Our census shows that more and more families, particularly those in the greatest need are turning to Children’s Centers to help pull them through these tough times,” Anne Longfield OBE, chief executive of 4Children, said in a statement.

Related:
Red Cross launches first emergency food aid for UK since WWII
Goldman Sachs Made 400 Million Betting On Food Prices In 2012 While Hundreds Of Millions Starved
The House of Rothschild