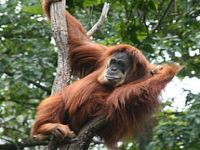 If anyone wants to know where Hell is situated, where one can find the most shocking scenes of cruelty, scenes of horror, scenes of terror, then Kandang, Indonesia, in the Aceh Peninsula, Sumatra Island - where animals are tortured, or left to die of thirst or starvation in some horrific open-air wildlife petshop for endangered species.


Activists have earmarked the illegal market on the outskirts of the city of  Kandang, in the Aceh Peninsula on Sumatra Island, Indonesia, as being one of the most fragrant venues of animal rights abuses in the world. A few kilometres from the protected rainforest, the market is said to be controlled by a local gangster who is untouchable, and who controls the poachers who show buyers a shopping list of endangered species, then go to the rainforest to collect them, within a few weeks.

Then they are brought back to the market, along with whatever other live animals the poachers can lay their hands on - orangutangs crammed into tiny cages, without enough room to stand or even stretch, pangolins with doleful expressions on their faces, sun bears, binturongs, slow lorises, wreathed hornbills, most of them on endangered species lists...many of them lying dead or dying in the most shocking conditions.

One orangutang was lucky - activists managed to release him into the wild again, but his luck was short-lived. He was shot 62 times for fun, as the locals giggled at his agony. 200 USD will buy the tourist an orangutang in this living hell, which has been in business for the last three years. Where have the Indonesian authorities been? Nowhere!

The images of the animals crouched terrified in their cages, wracked in pain and discomfort, literally dying of hunger and thirst and bad treatment, are so shocking that I cannot show them here. Suffice it to leave it up to the imagination of the reader, and the answer is no, it is twenty times worse, believe me.

Needless to say, the "man" who controls this animal Armageddon on Earth has grown rich from his disgusting exploits. If humankind is to call itself truly civilized, then surely it is time something was done?