Panama detains North Korean ship with smuggled weapons on board


Panama’s president has confirmed the finding by posting a photo of the military equipment on Twitter.
Cuban officials claimed the arms discovered on the ship were "obsolete Cuban missiles" being sent for repair. US military analysts, however, said the weapons could be upgraded into air-defense systems to be used against modern aircraft.

The Chong Chon Gang vessel was initially stopped on the Atlantic side of the Panama Canal on suspicion of carrying drugs. 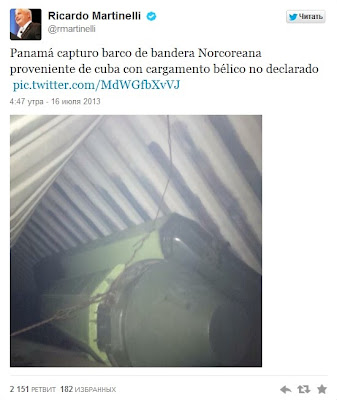 John Pike of Globalsecurity.org, which monitors international weapons, told USA Today the SA-2 was used in 1960 to shoot down a U-2 spy plane. Since then, he said, American engineers have worked to minimize the weapons' threat.

"I think the United States and South Korea and Japan have reasonable confidence they can jam it and blow up its radars and it could be rendered ineffective, but it could not be ignored," he said.

Martinelli told local television that 35 crew members were detained after resisting the efforts of the Panamanian authorities to redirect the ship to a nearby port of Manzanillo, while the captain attempted to commit suicide.

“This material not being declared and Panama being a neutral country, a country in peace, that doesn't like war, we feel very worried about this war material and we don't know what else will have... passed through the Panama Canal,” Panama’s president stressed.

"We're going to keep unloading the ship and figure out exactly what was inside. You can’t go around shipping undeclared weapons of war through the Panama Canal," Martinelli added.

Panama's security minister, Jose Raul Mulino, told Reuters that so far two only containers of military equipment have been discovered, hidden under 250,000 bags of sugar, each weighing 100 kilograms.

Shipping data obtained by IHS Maritime research group showed that the Chong Chon Gang passed through the Panama Canal on June 1, with a stated destination of Havana, Cuba.

After that it disappeared from the tracking system and reappeared in Manzanillo, Panama, on July 11, with IHS saying there were indications that the ship had changed cargo in the interim.

In 2010, the Chong Chon Gang was stopped by Ukrainian authorities, who found small-arms ammunition and narcotics aboard the vessel, Hugh Griffiths, an arms trafficking expert at the Stockholm International Peace Research Institute, told Reuters.

The North Korean government has not yet commented on the claims by the Panama authorities.

North Korea is barred from all arms exports as part of international sanctions imposed on the Communist state due to its controversial nuclear weapons program.

The sanctions against Pyongyang were toughened in February, following a new nuclear test and promises to continue developing nuclear arms, which it said was necessary due to US aggression.

According to UN data it’s not the first time that Pyongyang has violated the ban as it also shipped arms-related material to Syria in 2010 and delivered rocket fuses for Iran in 2008.