Is Our Sun In The Very Early Stages Of Shutting Down? 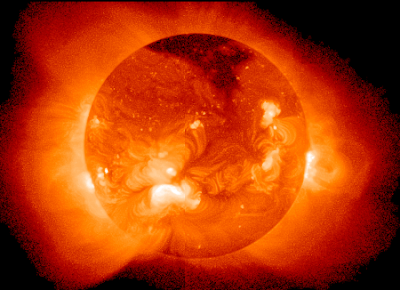 Something is up with the sun.  It has begun to behave very erratically, and scientists don’t know quite what to make of it.


Sunspot activity appears to be slowing down with each new cycle and absolutely gigantic holes have started to appear in the sun.  At the moment, the sun is approaching the peak of its 11 year cycle, and an increasing number of scientists are becoming concerned about what the next cycle will bring.  If sunspot activity continues to diminish, could the sunspot cycle eventually die altogether?  Is it possible that we could be approaching another ice age?

Even worse, could the increasingly erratic behavior of the sun be an indication that the sun is dying?  Traditionally, scientists have taught that the sun won’t die until billions of years from now, but in recent years astronomers have observed stars similar to our own sun suddenly begin to behave very erratically and then rapidly die.  Is it possible that the same thing could happen to our sun?

It is a fact that the current solar cycle has been the weakest in 100 years.  This has many scientists searching for answers…

The Sun is acting weird. It typically puts on a pageant of magnetic activity every 11 years for aurora watchers and sungazers alike, but this time it overslept. When it finally woke up (a year late), it gave the weakest performance in 100 years.

What’s even weirder is that scientists, who aren’t usually shy about tossing hypotheses about, are at a loss for a good explanation.

Of course most scientists insist that everything is going to be okay and that we don’t have a thing to be worried about, but others are not so sure.

For example, Matthew Penn of the National Solar Observatory believes that a new ice age may be on the way…

Penn offered another, more catastrophic option: the sunspot cycle might die altogether. His team uses sunspot spectra to measure their magnetic fields, and his data show a clear trend: the magnetic field strength in sunspots is waning.

“If this trend continues, there will be almost no spots in Cycle 25, and we might be going into another Maunder Minimum,” Penn states. The first Maunder Minimum occurred during the second half of the 17th century. Almost no spots were seen on the Sun during this time, which coincided with Europe’s Little Ice Age.

Another strange phenomenon that astronomers are watching closely is the appearance of absolutely massive holes in the sun.  Just recently, a massive hole that covered nearly a fourth of the entire surface of the sun made headlines all over the globe…

A space telescope aimed at the sun has spotted a gigantic hole in the solar atmosphere — a dark spot that covers nearly a quarter of our closest star, spewing solar material and gas into space.

The so-called coronal hole over the sun’s north pole came into view between July 13 and 18 and was observed by the Solar and Heliospheric Observatory, or SOHO. NASA released a video of the sun hole as seen by the SOHO spacecraft, showing the region as a vast dark spot surrounded by solar activity.

This comes on the heels of another giant hole in the sun that was spotted between May 28 and 31.

So is this something to be alarmed about? read more