Why are Americans (and some others) so Passive? 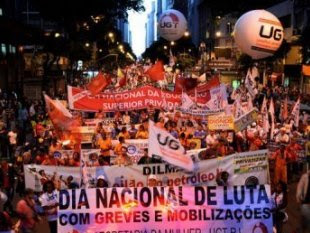 
The rest of the world is rioting in the face of massive inequality and injustice. Have we absorbed the oppressor's consciousness?


From the first breaths of life to the last, our lives are being stolen out from under us. From infant care and early education to Social Security and Medicare, the dominant economic ideology is demanding more lifelong sacrifices from the vulnerable to appease the gods of wealth.

Middle-class wages are stagnant. Unemployment is stalled at record levels. College education is leading to debt servitude and job insecurity. Millions of unemployed Americans have essentially been abandoned by their government.  Poverty is soaring. Bankers break the law with impunity, are bailed out, and go on breaking the law, richer than they were before.

And yet, bizarrely, the only Americans who seem to be seething with anger are the beneficiaries of this economic injustice – the wealthiest and most privileged among us.  But those who are suffering seem strangely passive.

As long as they stay that way, there will be no movement to repair these injustices. And the more these injustices are allowed to persist, the harder it will be to end them.

Where the hell is the outrage? And how can we  start some?

Paul Krugman ruminated about inflation-free unemployment the other day, and he was feeling pretty grim. Krugman is frustrated that clear prescriptions for this kind of economy – prescriptions born in John Maynard Keynes’ day – aren’t being followed. What John proposed then, Paul’s proposing now.

But he’s not optimistic.  “We can probably have high unemployment and stable prices in Europe and America for a very long time,” writes Krugman, “and all the wise heads will insist that it’s all structural, and nothing can be done until the public accepts drastic cuts in the safety net.”

One source for Krugman’s pessimism is the extensive political science research showing that “the level of unemployment matters hardly at all for elections; all that matters is the rate of change in the months leading up to the election.”

Krugman concludes that “high unemployment could become accepted as the new normal,” and worries that we’ll come to accept “a more or less permanent depression” as the norm – adding that “we could suffer endless, gratuitous suffering, yet the political and policy elite would feel no need to change its ways.”


Quiet in the streets

He’s right. A number of studies have linked political participation with economic conditions, typically with results like those Krugman describes.  But that doesn’t explain why Brazilians took to the streets in such large numbers recently.

A majority of Brazilians believe that their economy’s improving, according to a recent  Pew survey. 59 percent of Brazilians rate their economy positively and 74 percent say their personal financial situation is good.  By contrast, the same organization’s most recent  US polling showed that only 46 percent of Americans said they believe the economy’s getting better, while 50 percent think it’s getting worse.

The polling says that Brazilian political unrest is driven by a divergence in goals and priorities between political leaders and the population, triggered by poor public services, bus fare increases, and the cost of hosting the World Cup.

A similar divergence of priorities exists in this country.  Washington’s been focused on deficit reduction, while the public wants more job creation and economic growth.  But Americans are quiescent.

US voter turnout is extremely low when compared to other developed nations, even though we rank among the highest in terms of income inequality. And other forms of political expression are also under-used. The Occupy movement was originally very popular, for example, but most people were easily persuaded to abandon it and return to a state of quiet desperation.


Related:
Amnesty International calls for Urgent Action against abuses of peacefull protestors in Turkey [updated]
Washington Is Driving The World To The Final War
Dozens arrested in Turkey over protest tweets, accused of 'inciting hatred'