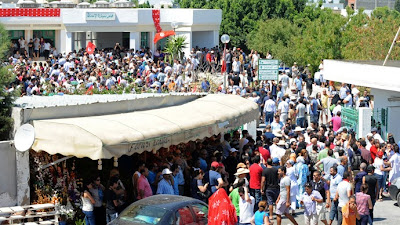 Tunisian opposition member Mohamed Brahmi was shot dead in the capital Tunis on Thursday, six months after the murder of another secular leader sparked a national crisis.


Thousands of secularists have poured on to the streets in protest.

Several Islamist party offices and government buildings have been set on fire.  Police in Tunisia’s second-largest city of Sfax have fired teargas to disperse hundreds of protesters who stormed a local government office while demonstrators threw stones at them. There were no immediate reports of casualties.

President Moncef Marzouki, who leads a secular center-left party, has called for calm in the face of “plots against Tunisia’s national security”.

Brahmi was the leader of the nationalist and secular People's Movement party, which has two seats in the National Constituent Assembly, the temporary parliamentary body charged with drafting a new constitution for the country. Twitter reports, citing eyewitnesses, say two men on a motorcycle shot the politician as he stood by his car, before speeding away. Brahmi's family witnessed the assassination.

Interviewed by local news station Mosaique FM, his pre-teen daughter said that her father "didn't want to leave the house" but then "received an urgent phone call and rushed out to his car", where he was mowed down.

Brahmi was declared dead upon arrival in hospital, with at least 11 bullet wounds.

"He died as a martyr to his opinion and position - he was killed by a terrorist gang," his wife told Mosaique FM, placing the blame at the hands of the ruling Islamist Ennahda party. 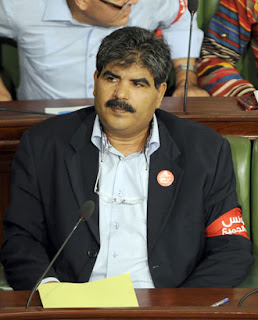 "This is the biggest catastrophe that could happen in Tunisia. We have now had a series of political assassinations of anyone with a different, loud voice,” said fellow opposition deputy Najla Bourriel, a member of the Democratic Bloc, to local news portal Tunisia Live.

Spontaneous protests broke out on an already charged day that officially marks the foundation of the republic, a significant date for secularists.

"Down with the rule of the Islamists!" the crowd chanted as it gathered outside key government buildings, the opposition headquarters, and the hospital to which Brahmi was taken.

Some demanded for Brahmi's body be brought out of the morgue and displayed in front of the crowd.

A mass protest has also been reported in the desert city of Sidi Bouzid, the birthplace of the demonstrations that led to the overthrow of authoritarian leader Zine El Abidine Ben Ali in January 2011, and 58-year-old Brahmi's hometown. Twitter photos show a fire at the regional administration building.

"This failed government has caused another national catastrophe. The streets are the solution," tweeted Tamarod, a grassroots opposition movement.


Two Ennahda party offices were set on fire by protesters in the towns of Menzel and Meknassy. Torchings of Muslim Brotherhood affiliates was a precursor to the overthrow of Islamist Mohamed Morsi in Egypt earlier this summer. 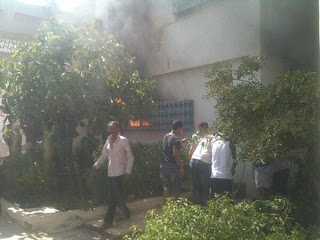 Ennahda has rebutted the accusations of its involvement, saying the murder was a "trap laid by criminals to cause in-fighting and violence instead of national consensus and peaceful alternation", and has called for those responsible for the "cowardly and despicable crime" to be "urgently arrested".

UN Human Rights chief Navi Pillay said he was "shocked and deeply saddened" by the murder.

"I call upon the authorities to immediately launch a prompt and transparent investigation to ensure that the people who carried out this crime are held accountable," Pillay declared in  a statement.

Friday will be declared a national day of mourning, announced Mustapha Ben Jaafar, the speaker of the National Constituent Assembly.

In February, the assassination of another secular political leader Chokri Belaid - also executed by gunmen on  a motorcycle - led to a political crisis in the country. Belaid was believed to be a target of radical Islamists, and secularist demonstrations following his brazen assassination brought down the Islamist government of Hamadi Jebali.

His murderers have not yet been brought to justice (although authorities say they have identified them) provoking accusations from the opposition that Ennahda is not interested in protecting secular politicians, and may even be shielding the radical Muslim assassins.

Although Tunisia paved the way for the Arab Spring when it toppled Ben Ali, the country has not been able to achieve stability in the two and a half years that have passed since. The National Constituent Assembly has not been able to agree not just on the religious and ideological make-up of the constitution, but  also on the basic political system the country will adopt.