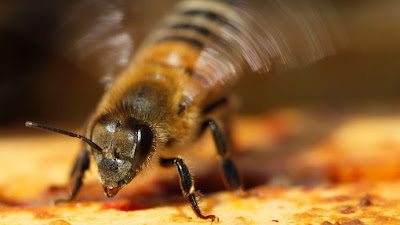 Honey bees are quickly disappearing from the US – a phenomenon that has left scientists baffled. But new research shows that bees exposed to common agricultural chemicals while pollinating US crops are less likely to resist a parasitic infection.


As a result of chemical exposure, honey bees are more likely to succumb to the lethal Nosema ceranae parasite and die from the resulting complications.

Scientists from the University of Maryland and the US Department of Agriculture on Wednesday published a study that linked chemicals, including fungicides, to the mass die-offs. Scientists have long struggled to find the cause behind the Colony Collapse Disorder (CCD), in which an estimated 10 million beehives at an average value of $200 each have been lost since 2006.

Last winter, the honey bee population declined by 31.1 percent, with some beekeepers reporting losses of 90 to 100 percent of their bee populations. Scientists are concerned that “Beemageddon” could cause the collapse of the $200 billion agriculture industry, since more than 100 US crops rely on honey bees to pollinate them.

The new findings are key in determining one of the causes of the CCD, but they fail to explain why entire beehives sometimes die at once.

UMD and DOA researchers found that pollen samples in fields ranging from Delaware to Maine contained nine different agricultural chemicals, including fungicides, herbicides, insecticides and miticides. One particular sample even contained 21 different agricultural chemicals. To test their theory, they fed pesticide-ridden pollen samples to healthy bees and then infected them with the parasite. They found that the pesticides hindered the bees’ abilities to resist the infection, thus contributing to their deaths. The fungicide chlorothalonil was particularly damaging, tripling the risks of parasitic infection.

“We don’t think of fungicides as having a negative effect on bees, because they’re not designed to kill insects,” Dennis vanEngelsdorp, the study’s senior author, said in a news release.

He explained that federal regulations restrict the use of insecticides while pollinators are foraging, but noted that “there are no such restrictions on fungicides, so you’ll often see fungicide applications going on while bees are foraging on the crop. The finding suggests that we have to reconsider that policy.”

Bees are declining at such a fast rate that one bad winter could trigger an agricultural disaster. California’s almond crop would be hit particularly hard, since the state supplies 80 percent of the world’s almonds. Pollinating California’s 760,000 acres of almond fields requires 1.5 million out-of-state bee colonies, which makes up 60 percent of the country’s beehives. The CCD is a major threat to this $4 billion industry.

Entomologists suspect that a number of other factors also contribute to the CCD, including climate change, habitat destructing and handling practices that expose bees to foreign pathogens. But the effect of agricultural chemicals is particularly alarming, especially since the US does not have laws banning the use of the pesticides that are affecting bee health.

“The pesticide issue in itself is much more complex than we have led to believe,” vanEngelsdorp said. “It’s a lot more complicated than just one product, which means of course the solution does not lie in just banning one class of product.”